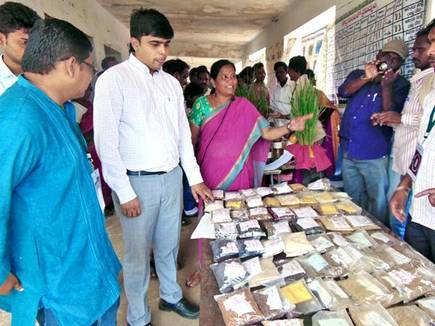 As part of continuing efforts to promote indigenous seed, crop diversity, and better food security to the girijan farmers, a number of organisations have come together to give a push to cultivation of such seed and crops.

As many as 170 farmers in the districts of Srikakulam, Vizianagaram, and East Govadari will take up sowing diverse seed varieties in half-acre of land each in kharif 2018.

In Visakhapatnam district, it will be taken up in Dumbriguda, Araku, Anantagiri, and Hukumpeta mandals.

“Twenty varieties of seed, covering millets, pulses, and vegetables, will be sown in line. On the fencing, creepers will be trained,” says P. Devullu, secretary of Sanjivani, an NGO working for the girijan farmers.

The process, called ‘Desi Bion Muna,’ meaning indigenous seed bag, will be taken up in the lands where ‘podu’ (shifting) cultivation has been going on, or the upland areas.

As many as 283 varieties of indigenous seed were collected from the Agency area of the district and other tribal areas of the State during the seed festival last year. They had been grown on a trial basis by the National Bureau of Plant Genetic Resources (NBGPR); the Regional Agricultural Research Station, Chintapalle; and Sanjivani; and NGOs – Laya and Aasara. WASSAN, the lead technical agency for Comprehensive Revival of Millets Programme of the State government, and NBGPR prioritised the seed based on participatory crop trials conducted in kharif-2017 in various organisations and identified farmers’ plots, according to M.L. Sanyasi Rao, programme manager of the technical agency.

Thirty to forty of the 283 varieties performed well, and the process is being taken forward by the seed bag practice.

Besides, three varieties for which codes are given by the NBGPR – ICDP 60 (nallchodi), ICDP 103 (peddachodi), and ICDP 182 (red gram) – will also be taken up as best performing.

The importance of indigenous seed is being underlined through celebration of seed festival by Sanjivani for 12 years now. It is known as ‘Itikila panduga’ in the Agency.

The thrust on identification of seed suitable for revival to improve farmers’ yield and, thereby, revive the traditional crops gives it a direction and objective.

This year, the festival was celebrated by Sanjivani with the support of Rythu Sadhikara Samstha, to which former IAS officer T. Vijay Kumar is the adviser; WASSAN, NBGPR; Agriculture Technology Management Agency; Department of Agriculture, Andhra Pradesh Government; and ITDA Paderu.