In a First, a City Frees a River Using Funds Meant To Concretise It

By Rishika PardikaronAug. 29, 2020in Economics and Technologies

The Godavari over a concrete riverbed in Nashik, Maharashtra, 2002. Photo: Devang Jani.

Bengaluru: The municipal corporation in the city of Nashik, in Maharashtra, has used funds earmarked for riverfront development under the Centre’s ‘Smart Cities’ mission to decommission the Godavari riverfront project.

The Nashik municipal corporation commenced the ‘beautification’ project in 2002, ahead of the Nashik Kumbh Mela in 2003, for which it concretised the river’s banks and bed, transforming it into a bathtub.

“In the riverbed, there were 17 ancient kund [ponds] that were destroyed by dynamiting, and then concrete was poured in,” said Devang Jani, founder and president of the Godapremi Seva Samiti, an environmental NGO. Jani lives on the banks of the Godavari. These kund were built around 1700, according to historical records in the Bombay Presidency Nashik Gazetteer, and they host natural springs.

In the next Kumbh Mela, in 2015, “the entire stretch of the river was bone dry,” Parineeta Dandekar,  associate coordinator  with the South Asia Network on Dams, Rivers and People, a non-governmental collective focusing on large-scale water infrastructure. “It was so remarkably dry that you could see vehicles parked in some stretches.” What the kund looked like, according to records of the Bombay Presidency Nashik Gazetteer, 1883

The Godavari, a historically and religiously significant peninsular river, depends on groundwater and small springs for its flow. The concrete severed these connections. “About 50% of the flow of many of these rivers is made up of base flow [flow comprising groundwater],” Dandekar said. Other reasons include spells of drought and low rainfall.

On June 10 this year, the Nashik municipal corporation finally drilled concrete out of the Godavari.

Experts hope that the move sets a precedent for a number of similar riverfront development projects, including bigger ones like the project involving the Sabarmati river, and will help ‘smarten’ cities better.

Such riverfront projects include engineering works to reduce the width of rivers, construct embankments, encroach on floodplains and convert them into commercial spaces – like with the Sabarmati riverfront project in Ahmedabad and an upcoming one in Pune vis-à-vis the Mula and Mutha rivers.

Danderkar said, “The main objective here is not river rejuvenation but having some infrastructure on river stretches.” According to her, such projects – including large-scale dam construction activities as well – happen in the first place because they’re motivated by a “contractor-driven, infrastructure-heavy approach” that bureaucrats and politicians have taken towards rivers in the country.

But such an infrastructure-heavy approach fails to account for rivers as ecosystems. As a counterexample, the European Water Framework Directive provides guidance on implementing river-basin management projects even as it focuses on improving rivers’ ecological standards, restoration and water quality. “Can the river conservation directorate cite even one example of river restoration in this country?” Dandekar asked. Concrete being removed from the Godavari’s riverbed on June 10, 2020. Photo: Devang Jani

Experts have also routinely said that the best way to mitigate flood damage is to let floodplains be and to develop floodplain-zoning policies.

“Cement walls built on both sides of the Sabarmati have reduced the river’s flood-carrying capacity,” C.R. Babu, an ecologist and professor emeritus at Delhi University, told The Wire Science. According to him, such embankments, plus buildings, public parks and other infrastructure that encroach on floodplains will cause rivers to overflow and flood cities.

Questions to the National River Conservation Directive were unanswered at the time of publishing. This article will be updated if and when a response is received.

In 2015, Jani filed a public interest litigation petition in the Bombay high court against the Nashik Municipal Corporation, the district administration and the Maharashtra state irrigation department.

In February 2017, the court ordered that a representation be filed before the Nashik Municipal Corporation and that the corporation then take appropriate action within two months.

But it didn’t. “They only brought in security guards to try to prevent people from polluting the river, and they set up a Godavari Samvardhan Kakshan,” a department within the corporation, Jani said.

So in 2018, he sent a contempt notice to the municipal corporation and, in response, the corporation “said they will start working on de-concretisation and the revival of the 17 kund under the ‘Smart Cities’ project,” Jani said.

“They took my prayer before the high court and turned it into the detailed project report.” 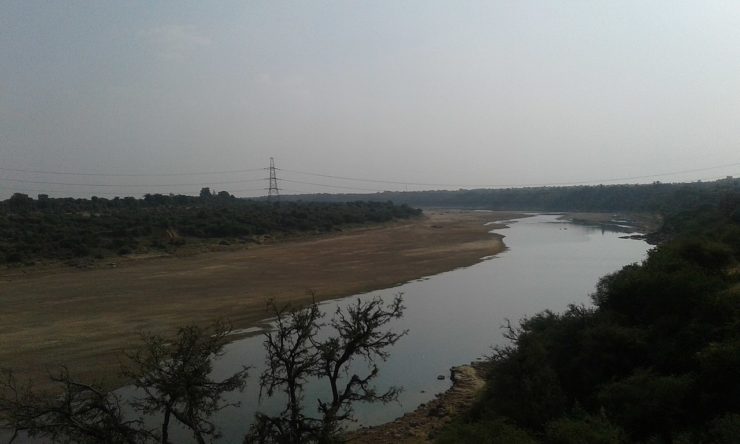 Today, the Sabarmati flows more like a canal in certain parts than like a full-bodied river. Experts have attributed the creation of these anaemic spots to poor connectivity with different sources of water and drainage.

This model of constructing embankments “might be useful [for tourism] in European countries, where rainfall is more or less uniform throughout the year,” Babu said, “but we have rivers that flow heavily during the monsoons.” Now, when the river fills up, it will only flood and overflow into Ahmedabad city.

Additionally, rivers connect to their drainage area through small tributaries and streams. Himanshu Thakkar, the coordinator of SANDRP, said these features of the Dravyavati river in Jaipur were destroyed when “connectivity to drainage area [were] blocked by concretisation” under the riverfront project. This is likely one reason Jaipur floods during the monsoons.

Sarang Yadwadkar, a Pune-based environmental activist, said the Mula-Mutha riverfront project in the city is aimed at “reducing the river’s width by channelising it and constructing embankments on both sides.” The floodplains ‘reclaimed’ thus are likely to be used to set up gardens and commercial centres.

“Khadakwasla dam is barely 8 km from the city, and if there is rainfall and water is released from the dam, it will gush into the river,” Yadwadkar said. This gush will then enter the city.

Similar examples of projects that bring on floods include those on the Cooum river in Chennai and on the Gomti river in Patna. There are also ‘lake beautification’ projects in Bengaluru along similar lines that fail to address core issues like drying-up and pollution, according to Babu.