By Neha SinhaonSep. 11, 2018in Environment and Ecology Early one morning last September, 200 Delhiites fanned out across 17 locations, with an illustrated leaflet in hand and a clear agenda — to count and photograph butterflies in the city. This was possibly the first such citizen science exercise dedicated to celebrating and studying butterflies, and was organised as part of ‘Butterfly Month’ and led by the forest department, Delhi government and the Bombay Natural History Society.

The teams recorded as many as 81 butterfly species, of which 12 could not be photographed. Among the largest was the lime butterfly, its wings a psychedelic pattern of yellow and red and black, and so named because it lays its eggs on the lime plant. Among the smallest was the small blue — a tiny butterfly.

Last year’s count also found unexpected butterflies — the chocolate pansy, a butterfly found generally in humid forests, and the delicate little psyche was seen after a gap of three years. Some had come from the Himalayan foothills: pea blue, the mottled and common emigrants.

Many dramas unfold in the Indian city. A bull may hold up traffic. A monkey may clamber to the top of a monument or get inside an office. A Nilgai may leap on a road divider.

But there are also the smaller lesser noticed events, though no less dramatic, of which the butterflies are most striking. They flutter like eyelashes, dip like fish, or float languidly in an undulating rhythm that is mesmerising to watch, like ripples on a lake.

The national capital, a perennial dust bowl and polluted by construction and traffic, doesn’t seem like a hospitable environment for these delicate creatures, but a citizen science movement is tracking them —and the findings are encouraging. 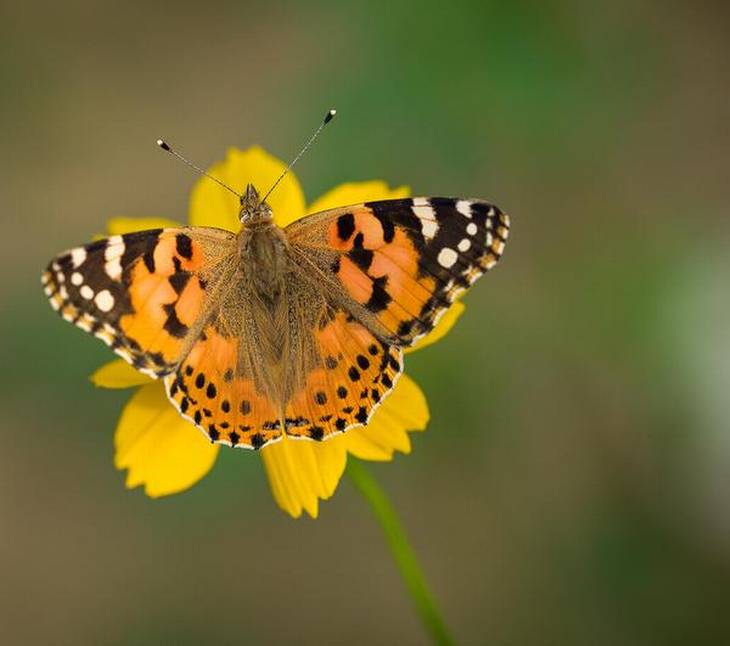 The survey began on Friday, with 48 teams and as many locations, with the citizen scientists keeping a special eye on busy residential and commercial areas including Sarita Vihar and Karol Bagh.

You would think that all a butterfly needs is flowers. And Delhi does have flowers aplenty. But their requirements are far more complex. For instance, the small, but striking red Pierrot, white-and-red with a bright orange hind wing, feeds on nectar, but lays eggs on a particular succulent, the Bryophyllum or Kalanchoe. The life-cycle of the butterfly requires specific trees, shrubs or plants to be completed: the host plant where it lays eggs, and whose leaves the caterpillars feed on. So the more common the host plant, the more abundant the species of butterfly that lives off it. In Delhi, the survey found, the commonest butterflies are tigers. The plain tiger (a vibrant orange and black) and the striped tiger (orange and black, and striped) lay eggs on the abundant aak or milkweed plant.

Trees are as important as shrubs, especially when butterflies negotiate the cityscape where skyscrapers, highways and vehicles interrupt their flight. “We noticed that butterflies — especially those that are not strong or long fliers — are using the canopies of avenue trees to rest. For instance, the awl and the swift butterflies will rest on a tree before they cross a wide, inhospitable road,” says Sohail Madan, who runs the Conservation Education Centre in Delhi’s Asola Bhatti Wildlife Sanctuary.

Nearly 90% of the world’s butterfly species are found in the tropics, and their extreme sensitivity to climate change makes them good indicators of environmental health and, therefore, important subjects of study.

In the U.S. for instance, the monarch butterfly, which closely resembles the striped tiger, and migrates across continents has witnessed a 90% decline in population over 20 years. The stochastic warming events in Canada have delayed their south-bound migration, and the insects die from the cold en route.

But it’s not just in Delhi’s forests that butterflies are found. A rapid biodiversity survey done in Sarojini Nagar this July — where over 11,000 trees are to be felled for ‘redevelopment’ of the colony — revealed several butterfly species including the common emigrant, pea blue, mottled emigrant, plain cupid and common banded awl. Here, they lay eggs on unmowed strips of grass growing on the footpath and feed on a common wildflower — that ubiquitous yellow-and-white coatbutton flower — that artificial manicuring tends to weed out along with wild grass. So, interestingly, Delhi’s many parks do not have as many butterflies as they could. “Delhi’s parks are managed in a horticultural way, not in an ecosystem way. Too much herbicide and pesticide is used. Trees and shrubs are lopped to give them a particular shape. That kills caterpillars. Grass is mowed very short,” says Mohammad Faisal, Delhi-based entomologist.

Through citizen science, the hope is to build corridors for butterflies — flush with wild flowers, host plants and native species. Former U.S. President Barack Obama tried building a ‘highway’ for monarch butterflies by planting milkweed species. In Delhi, small butterfly gardens are being set up in government schools and colleges.

In 1986, Danish entomologist Larsen Torben had reported that Delhi had 85 butterfly species. Here’s hoping this survey ups the count.

“Just living is not enough. One must also have freedom, sunshine and a little flower,” Hans Christian Anderson is believed to have written. This was written specially for butterflies. And perhaps, with more butterfly literacy and action, these dazzling creatures may thrive freely on its chosen flower.