Gopi Shankar does not fit in any prescribed male or female gender. Refusing to be categorized as “he” or “she,” Gopi asked us to use the gender neutral pronoun “ze.” And ze is indeed a free soul who is helping hundreds of people from the LGBTQIA community through an organization ze set up called Srishti Madurai.

“Since childhood I never felt like a girl. I was always an outsider among girls and never mingled with them. Initially, I thought I was a tomboy. I used to indulge in boyish activities with my brother. I did not question my gender at that young age but as I grew up and started getting bodily changes like other females of my age, I could not come to terms with them,” shares Duncan Kingsley, a 25-year-old transboy from Tamil Nadu.

There are hundreds of people like Duncan who struggle with their gender preferences for years before finally coming out of the closet.

And Gopi Shankar is here to help them. “I don’t identify myself as male or female. I consider myself as a loving human being who is beyond gender,” ze says. What is ‘ze’, you ask? Ze is a gender-neutral pronoun, and Gopi prefers that we use it when addressing him.

Gopi is passionate about the issues confronting the LGBTQIA (Lesbian Gay Bisexual Transgender Queer Intersex Asexual) community. Ze knows the troubles of this community inside out and has been supporting it for a long time.

Gopi came out of the closet when ze was 19. Unlike many who continue to struggle and hide their true preferences, Gopi did not just choose to openly accept it but is also rigorously working to support others in need. 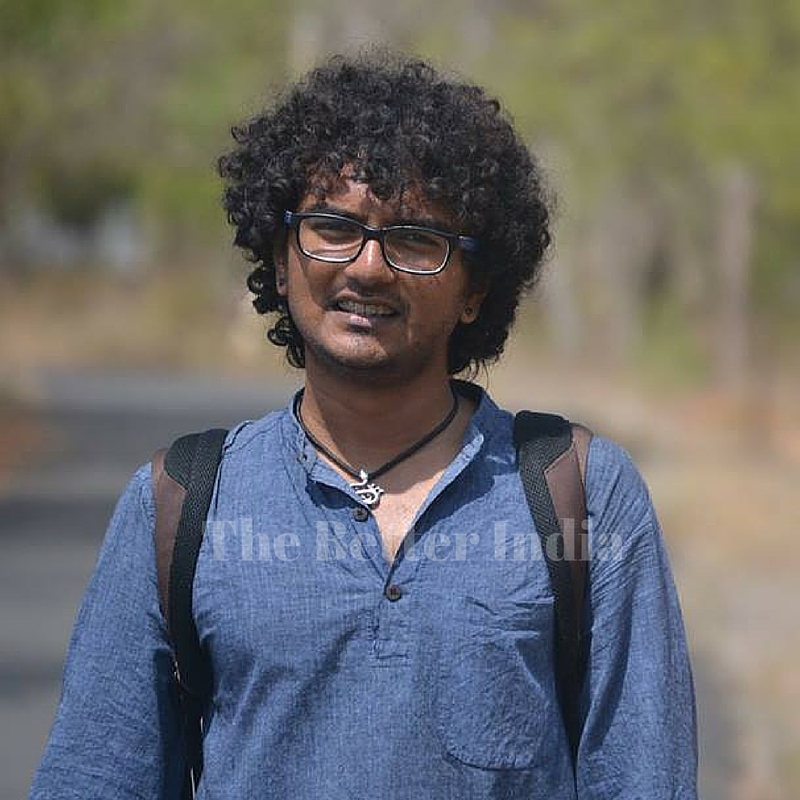 Gopi Shankar does not like to be described as either male or female.

“Gender is related to the physical and emotional perception of an individual. Restricting gender in the binary categories of female and male is erroneous as we have to be aware about the existence of more than 20 categories of gender,” says Gopi.

Ze is the founder of Srishti Madurai, an organisation that counts amongst its members human rights activists, independent scholars, and genderqueer activists who spread more awareness about the LGBTQIA community.

Srishti Madurai runs a 24×7 helpline and provides face-to-face counseling services to community members in need. It also has resources, research material and literature on LGBTQIA.

Started in 2011, Srishti Madurai goes to schools and colleges and conducts seminars and workshops to not just raise awareness but also make the younger generation more empathetic towards the often-stigmatized LGBTQIA community.

“Here we do not want to narrow down our emphasis on homosexuality, rather we want to emphasize gender-variants. Gender and sexuality are the rights of an individual and interfering in those is like interfering in personal freedom,” says Gopi.

Gopi has also been supporting Santhi Soundarajan, an Indian athlete who was stripped off her silver medal after a gender fail test in 2006. Gopi has organized many workshops and seminars to spread awareness about LGBTQIA community.

Deeply moved by Santhi’s plight, Gopi has been fighting against the system to help restore her dignity.

Ze recalls the issues faced by Santhi as she was insulted in front of the crowds at the 2006 Asian Games held in Doha. She was told that she could not compete in sports in the future and sent back to her village. Unable to bear the humiliation, Santhi tried to kill herself by drinking poison but was saved at the last moment.

“Everyone looked down on me. Everyone was looking at me in this new way: Is she a man? Is she a transvestite? It’s very hurtful. It ruined my life and my family’s life,” Santhi recalls.

Gopi has stood like a pillar with Santhi and is fighting to get her medal, prize money and respect back.

“She is a woman. Just because Santhi doesn’t conform to their preset standards, it doesn’t mean she is not a woman. It is extremely upsetting to see that the International Olympic Association doesn’t understand that gender is a complex issue. All we want now is for Santhi to get her rights back, along with a permanent job, so that she can pursue her dream of training underprivileged athletes,” says Gopi.

To spread more awareness about the issues faced by the LGBTQIA community, Shankar wrote Maraikappata Pakkangal (Hidden Pages), the first book on gender variants, in Tamil. Gopi has also been supporting Indian athlete Santhi Soundarajan after she failed the gender test.

The book is a scientific, sociological, anthropological, psycho-analytical, religious, philosophical, and political take on gender, according to Gopi. This book also interprets references to alternative genders in Hindu mythology, the Quran and the Bible.

Gopi is also the youngest panelist to share the chair in UGC and ICSSR sponsored national seminars. Ze has conducted more than 80 seminars on gender and sexuality and also organised Asia’s first Genderqueer Pride Parade inhe 2012.

First published on The Better India under the title At 19, Ze Came out of the Closet. Today, Ze Is Helping the LGBTQIA Community Live with Dignity.