Undeterred by displacement from Pakistan during the 1971 war and resettled in the unforgiving Thar Desert, women now living in Bikaner district have used their skills of traditional embroidery to earn a living with dignity 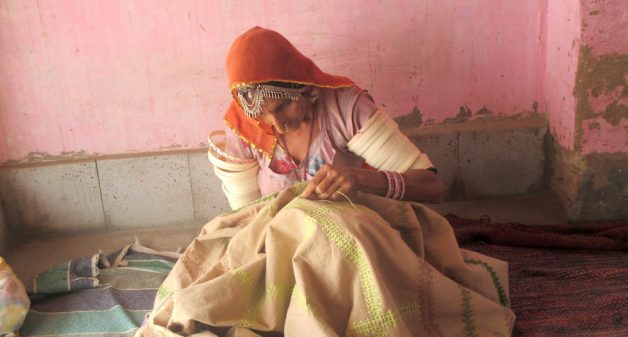 The women of Dandkala village in Kolayat administrative block of Bikaner district in Rajasthan are a class apart. Although they are refugees from Umerkot district in Sindh province of Pakistan, they have fought displacement by taking ownership of their traditional embroidery skills, which has enabled them to be breadwinners for their families.

Located 140 km from Bikaner city in the Thar Desert, which is harsh, arid and tough with shifting sand dunes and extreme temperatures, the lives of rural women in Dandkala is not easy by any means. But it has not stopped the women artisans to earn a living with dignity.

Settled in 1988, the villagers had earlier stayed at refugee camps in Barmer and Jaisalmer for almost 17 years. There were lakhs of people ousted from Pakistan in these camps, who had fled to the adjacent states during the 1971 India-Pakistan war. The Rajasthan government has at that time allotted land to these oustees. In 1987, western Rajasthan suffered its worst drought of the century and Bikaner was one of the badly hit districts. Lack of food, water and fodder left thousands of families desolate and wiped off about half of the livestock. In these extreme conditions, the villagers either migrated to cities or earned a pittance at road construction sites.

“When my husband was allotted 25 bighas of land at Dandkala, we were living in abject poverty. When we came first to settle in the village from the camp in Barmer, we were shocked as it was entirely a tough dry patch without trees, shrubs, shade or water. We, like other 250 families in the village, had no option but to cultivate the virgin land, which had never been cultivated earlier,” 58-year-old Paaro Bai told VillageSquare.in. “The drought in 1987 further aggravated our problems. It was difficult to get a square meal in a day. It was such miserable condition that we had not taken bath for months together. My son and daughters were full of lice and used to stink badly. In that terrible condition, to earn a livelihood I used to accompany my husband along with our infant children on our laps wherever the thakedar (contractor) took us to work for road construction. Most of the women like me, who came from Sindh province of Pakistan, have the only skill that was special kind.”

Paaro Bai was referring to Kashida, a special kind of embroidery that includes various styles such as taanka bharat, soof, pakka, kambiri, kharak, kachcha and sindhi. “At our camp in Barmer and here in the village, middlemen took advantage of our situation as most of us were illiterate, unorganized and were in need of money,” she said. “The middlemen were exploiting us for a very long time by giving us very less for our exquisite hand embroidery.”

Sitting nearby, Santosh, who had been working among the women artisans, said, “The village falls in the command area of Indira Gandhi Canal and in 1988 the URMUL Trust expanded its activities in these areas. URMUL Seemant Samiti was formed at Bajju in Kolayat block to work in 113 villages.”

“Earlier, Sanjoy Ghose accompanied by URMUL functionaries had seen me toiling hard in a road construction work. He had seen my son and daughters sleeping under the scorching sun subject to dust, heat, noise and multiple hazards. Then after that when URMUL health workers visited the village for treating the tuberculosis patients, then I showed the handicraft,” says Parro Bai. “Their visit to my hut proved to be watershed in my life. They acted positively and started income-generation project of embroidery.”

URMUL supported the women artisans to upgrade their traditional skills, provided technical support and linked them with national and international markets. The non-profit also freed them from the stranglehold of the exploitative middlemen. Women artisans in Dandkalan, Gokul, Bhaloori Bijeri, Bikendri and other villages of Kolayat and Pugal blocks of Bikaner district started getting organized in self-help groups (SHGs) and further enhanced their skills in kashidakaari (embroidery).

“Constant orientation by famous designers like Laila Tyabji and graduates from National Institute of Design (NID) and National Institute of Fashion Technology (NIFT) helped women to hone their skills,” Santosh told VillageSquare.in. “Now these women earn between Rs 3,500 and Rs 6,000 a month.”

“Kashida mharo khet bhi suu aur fasal bhi (Embroidery serves us a field, crop and produce for us). When I started working with URMUL my husband created lot of hurdles but when he saw that my earning is helping the family, so he stopped. Earlier we were not able to feed ourselves and our children a square meal but now there is no such shortage,” said Paaro Bai.

Paaro Bai is a founding member of a SHG and she has helped 40 to 50 women of her village to earn between Rs 3,000 and Rs 5,000 every month. She had trained her daughters, Manguri and Mathri, who are now married and live in Barmer district. They have trained other women of their villages. Women artisan’s involvement in Kashida work helps them to remain in their villages, rather than migrating to the cities.

Most of the work is done in homes and not under controlled conditions. Their own homes are their workplace and they earn with dignity. Capacity building trainings, regular interaction with URMUL functionaries, designers and buyers enables them to see the world in a wider perspective.

Paaro Bai does her embroidery work along with her daughters-in-law, nieces and other women of the village, which operates like a Rangsutra Centre. Shubham Sharma Sen, a graduate of NIFT, explains about Rangsutra. “It’s a company of artisans set up by social activist-turned entrepreneur Shumita Ghose 12 years ago. It was created to ensure regular work and market access to artisans. Artisans are co- owners and shareholders in the enterprise. They are part of board of directors and have a say in costing, planning, production and wages,” Sharma Sen told VillageSquare.in. “Paaro Bai is a shareholder in the company. Over 3,500 weavers, embroiderers and artisans from Rajasthan, Uttarakhand, Andhra Pradesh, Assam and West Bengal have formed the company. Seventy percent of Rangsutra’s artisan owner-workers are women. The work and money they earn through this work have given these women more say at home. These women now want to send their daughters to school and some have become group leaders in their villages, motivating other women to follow in their footsteps. The traditional embroidery used for making personal trousseaus is now market linked and kept alive.”

Rangsutra is now a successful enterprise. “Rangsutra’s biggest buyer is Fab India (a popular chain of stores). It also exports in small quantities to France, the Netherlands and the UK,” says Sharma Sen. “The global attention means that there is continuous need to augment the strength of the existing groups and increase their capacity by speeding up the work while maintaining the quality. Retaining the cultural identity, the traditional embroidery used for making personal trousseau is now market-affiliated and kept alive.”