Tashi Wangdi, director and member secretary, Indian National MAB Committee of the Ministry of Environment, Forest and Climate Change, said the new designation broadens the possibility of engaging and co-operating with biosphere reserves in the MAB network internationally in order to look at conservation and development in a holistic manner.

As per UNESCO, the buffer zone adjoins the core area and is used for activities compatible with sound ecological practices that can reinforce scientific research, monitoring, training and education.

The transition area is the part of the reserve where the greatest activity is allowed, fostering economic and human development that is socio-culturally and ecologically sustainable.

About 35,000 people, mainly from the Lepcha, Bhutia, Nepalese and Limboo communities inhabit 44 villages in the areas surrounding the park. 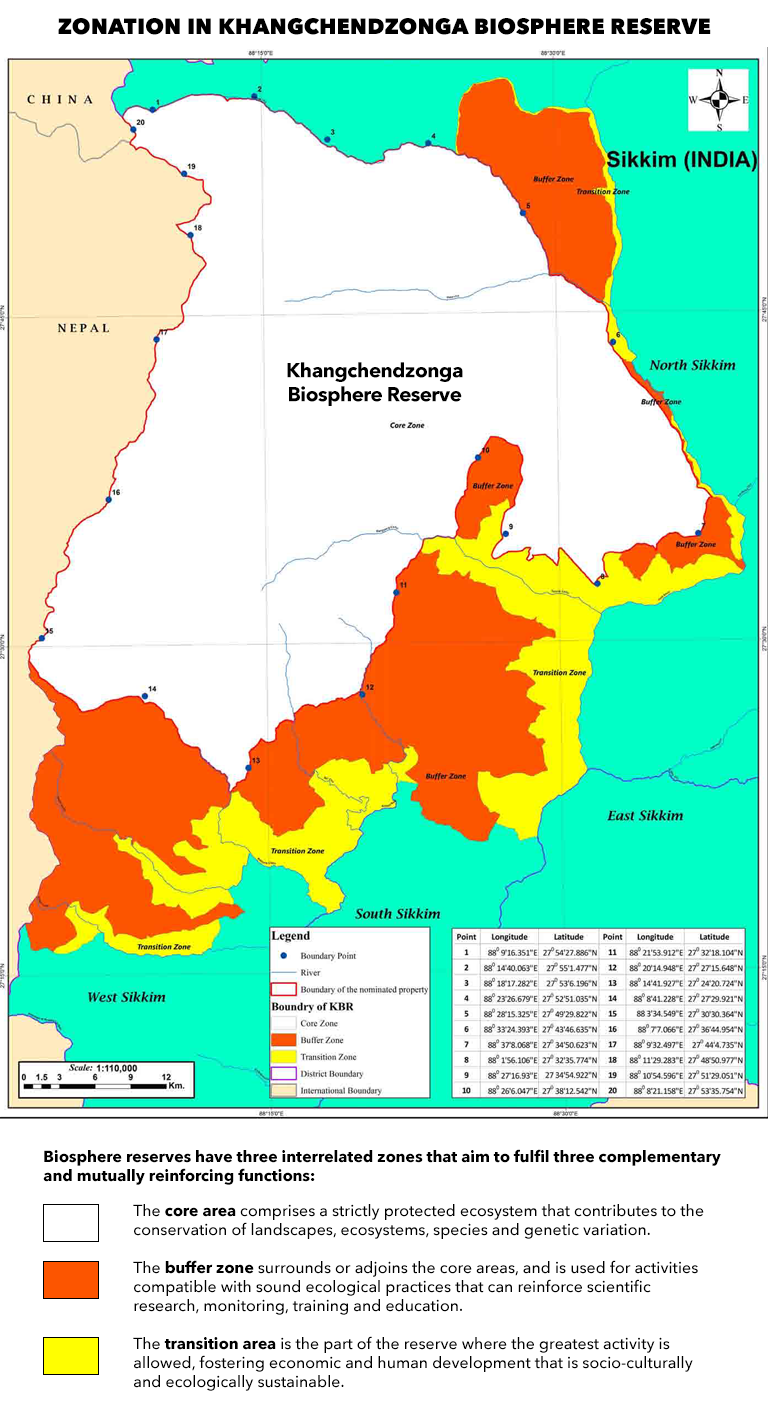 This apart, the WNBR widens the scope for better engagement of concerned ministry departments for troubleshooting as well for facilitating funds and resources for conservation work.

“In addition to that, we give importance to research and development activities so that we can find out gap areas in conservation, in development and in livelihood so they can be addressed,” Wangdi said.

Hemant K. Badola, advisor (biodiversity) in the office of Sikkim’s Chief Minister Pawan Chamling said the state is giving high priority to the conservation of landscape and importance to culture dissemination among masses.

Badola, the lead author of the UNESCO MAB nomination document of KBR stressed that the new inscription means the Sikkim government policies on promotion of ecotourism, organic farming and socio-economic development in the transition zone of KBR has proved “highly beneficial.”

The former scientist in-charge of the G.B. Pant National Institute of Himalayan Environment & Sustainable Development (Sikkim) said it is also vital to understand that organic farming in transition zone of KBR has a great bearing upon enrichment of biodiversity in the area, said Badola,

Organic farming in the transition zone of Khangchendzonga Biosphere Reserve has influenced biodiversity conservation in the area. Photo by Sahana Ghosh/Mongabay.

Occupying nearly 40 percent of the state, this biosphere reserve is one of the highest ecosystems in the world. Within an area of 2931 square km, the landscape slopes up from 1,220 to 8,586 metres.

At Yuksom, a tranquil hamlet close to the entry of the KNP, friendly hosts, unhurried lifestyle and warm, inviting homestays that complete the rustic experience with traditional food are not only ensuring sustainable livelihood for the locals but also enabling them to protect and manage forests in accordance to the state’s ecotourism policy. Yuksom is the first capital of Sikkim.

KCC has been assiduously monitoring the influx of trekkers and the items and waste they bring into the national park.

The hamlet of Yuksom at the edge of the Khangchendzonga National Park, Sikkim. Photo by Sahana Ghosh/Mongabay.

On their exit from the park, each item brought back is checked against those listed upon entry. If the items brought back are fewer than the ones taken in (implying littering inside the protected area) they are fined. Similarly, unauthorised extraction of medicinal plants and specimens including butterflies and moths is a strict no-no.

Locals opined more patrolling and monitoring staff is needed. In fact the KNP management plan discusses the shortage of trained staff to “protect some valuable medicinal plants of the park from illegal collectors and regular patrolling to check the cattle grazing within the park.”

Of late, the organisation’s Pema G. Bhutia revealed, travel companies bringing in large number of tourists at one go has become a cause for concern. He emphasised the importance of estimating the park’s carrying capacity: the number of people inside the park at one time.

“One aspect we are looking at is exploitation of the national park by some travel companies. We have certain travel companies who are promoting mass tourism bringing 40 to 50 people at one go. Following the UNESCO tag for the KNP we had hoped there would be studies and regulations in place regarding carrying capacity of the area. We hope that with the renewed focus, some steps can be taken,” Bhutia told Mongabay-India.

B.S. Siktel, the director of KBR agrees. “Poaching is no longer a major issue and biopiracy has diminished but tourism has gone up. We do not know the carrying capacity and no studies have been undertaken so far,” Siktel told Mongabay-India. “The landscape is a heaven for trekkers and pilgrims and ecotourism is a key money maker for the indigenous communities. While we recognise the importance of tourism, we also are aware of the pressures that mass tourism brings.”

Siktel pointed to the park’s management plan (2008-2018) that mentions the perils of unregulated tourism including damages to vegetation and change in the behavioural pattern of wild animals in general.

“Unregulated garbage dumping, un-designated camping sites and use of local timber wood for cooking pose a threat to the bio-resources of the park.”

A garbage monitoring form is given to each tourist on entry to the Khangchendzonga National Park to monitor waste generation. Photo by Sahana Ghosh/Mongabay.

But numbers are just one side of the coin.

One of the key tenets of ecotourism practised at Yuksom is interaction between hosts and guests. According to Uden from KCC, this interaction (a casual chat over a bonfire, or on a jungle trek) is aimed to apprise visitors of the importance of the landscape and culture. The more they learn, the less chances there are for any inadvertent harm to the place.

But many private hoteliers and fly-by-night operators disregard the education part of the deal.

“So guests do not learn to value the landscape. Moreover, the benefits from ecotourism do not come to the community,” Uden said. “ Our model of ecotourism relies on travellers viewing the landscape with respect and this attitude triggers positive actions such as not disposing any waste in the trek. This helps us in conservation.”

To drive home the point on awareness, KCC’s Bhutia cites the example of the Darjeeling Himalayan Railway, popularly called the “toy train”, which is also a UNESCO World Heritage Site.

The Darjeeling Himalayan Railway or toy train is a World Heritage Site. Photo by SupernovaExplosion/Wikimedia Commons.

“The kind of joy and pride that one experiences while riding the Darjeeling toy train, similar pride and joy should be felt by visitors to KNP/KBR landscape. Instead of thinking that one is traveling to one of those national parks, they should feel the difference in understanding that KNP is special. We need to work hard and create awareness in this regard,” Bhutia stressed.

Diminishing use of Lepcha, Bhutia and Nepali languages, the changing character of traditional villages and questions about the cultural appropriateness of tourist-town “nightlife” are listed in the management plan as some of the apprehensions regarding impacts of tourism.

As per the plan: “At the heart of all these concerns is a perceived loss of Lepcha, Bhutia and Nepali identity in the own homeland and a wish to maintain styles of tourism that are appropriate to the national park and cultural context.”

Badola stressed on the importance of linking human-centric biodiversity conservation to the transboundary nature of the Khangchendzonga landscape.

“The endurance of the landscape is evidence of the fact that biocultural knowledge from local people can bring protection and biodiversity conservation benefits to a region,” Badola, also the former nodal scientist for the Khangchendzonga Landscape, Indian part, explained.

Having lived in Sikkim for over two decades, the state’s chief wildlife warden C.S. Rao attests to the fact it is due to the reverence towards Mt. Khangchendzonga that retaliatory killings are unheard of, despite incidences of crop depredation by animals in the region.

Badola highlighted the harnessing of medicinal plants as an example of preservation and continuation of biocultural knowledge. For example, Lepcha tribe traditionally use 118 medicinal plant species (targeting 66 ailments) and the Limbu tribe use 124 plants (curing 77 ailments).

This knowledge is the secret of how communities have responded and adapted to various environmental changes in the context of climate change and globalisation, he added.

The Red Panda is the state animal of Sikkim. Photo by Carsten.nebel/Wikimedia Commons.