For long, the pastoralist Kurubas of Karnataka have journeyed for months to graze their hardy Deccani sheep. But with declining demand for their animals' manure and wool, many are seeking other sources of income

On the Bagalkot-Belgaum road, S. Bandeppa was walking with his herd of sheep one afternoon when I met him. He was looking for farmland to stay on for a while with his animals. “Our job is to find landlords who will give us good money for the manure that my animals produce for the land,” he said. It was winter, the time when Kuruba shepherds are on a journey that starts from October-November, while agricultural work is at a low.

From then till around March-April, the pastoralist Kurubas of Karnataka, listed as a Scheduled Tribe, move from place to place in groups of two or three families, usually along the same routes, covering, they estimate, a total distance of 600 to 800 kilometres. Their sheep and goats graze in the fallow fields, and the shepherds earn modest sums for the manure of the animals from the farmers. Bandeppa earns at most Rs. 1,000 per stop from a ‘good landlord’, he says, for a few days of stay. Then he sets out for the next stop, from where he looks for farms nearby to arrange a decent deal. In the past, he also received items such as food grains, jaggery and clothes, but says this is becoming harder to negotiate with the farmers.

“Living on the landlords’ land with our animals and children is not easy [now],” says Neelappa Chachdi. I met him on a farm near the Bailhongal-Munavalli road in Bailhongal taluk of Belgaum (now Belagavi) district, where he was erecting boundaries with rope to restrain the herd.

But that’s not the only change the pastoralist Kurubas are facing. Over the past two decades, the demand for the wool of their sheep – animals bred in the rugged terrain of the Deccan region of south-central India – has been falling. The sturdy Deccani sheep can withstand the semi-arid climate of the land. For long, a major portion of the earnings of the Kuruba shepherds came from supplying wool for the coarse black woollen blankets locally called kambali (and gongadi or gongali in Maharashtra and Andhra Pradesh). It supplemented their income from the manure their animals produced for farmers. As a readily and locally available fibre, the wool was relatively cheap and in demand.

Among the buyers were the weavers of Dadibhavi Salapur, a village in Ramdurg taluka of Belagavi district. Many of the weavers are also Kuruba, a sub-group of the community. (The Kurubas also have permanent homes and villages, and different sub-groups are pastoralists, weavers, cultivators and so on). The blankets they wove were once popular with the country’s armed forces, but are no longer in much demand. “They use sleeping bags now,” explains P. Eeshwarappa, a weaver, who owns a pit loom in Dadibhavi Salapur, where the traditional black woollen blankets are still produced.

“The reduced demand for Deccani wool is also due to cheaper alternatives, including mixed synthetic fabrics as well as other varieties of woollens that have flooded the market now,” says Dinesh Seth, the owner of a shop in Ranebennur town in Haveri district, some 200 kilometres from Dadibhavi Salapur. 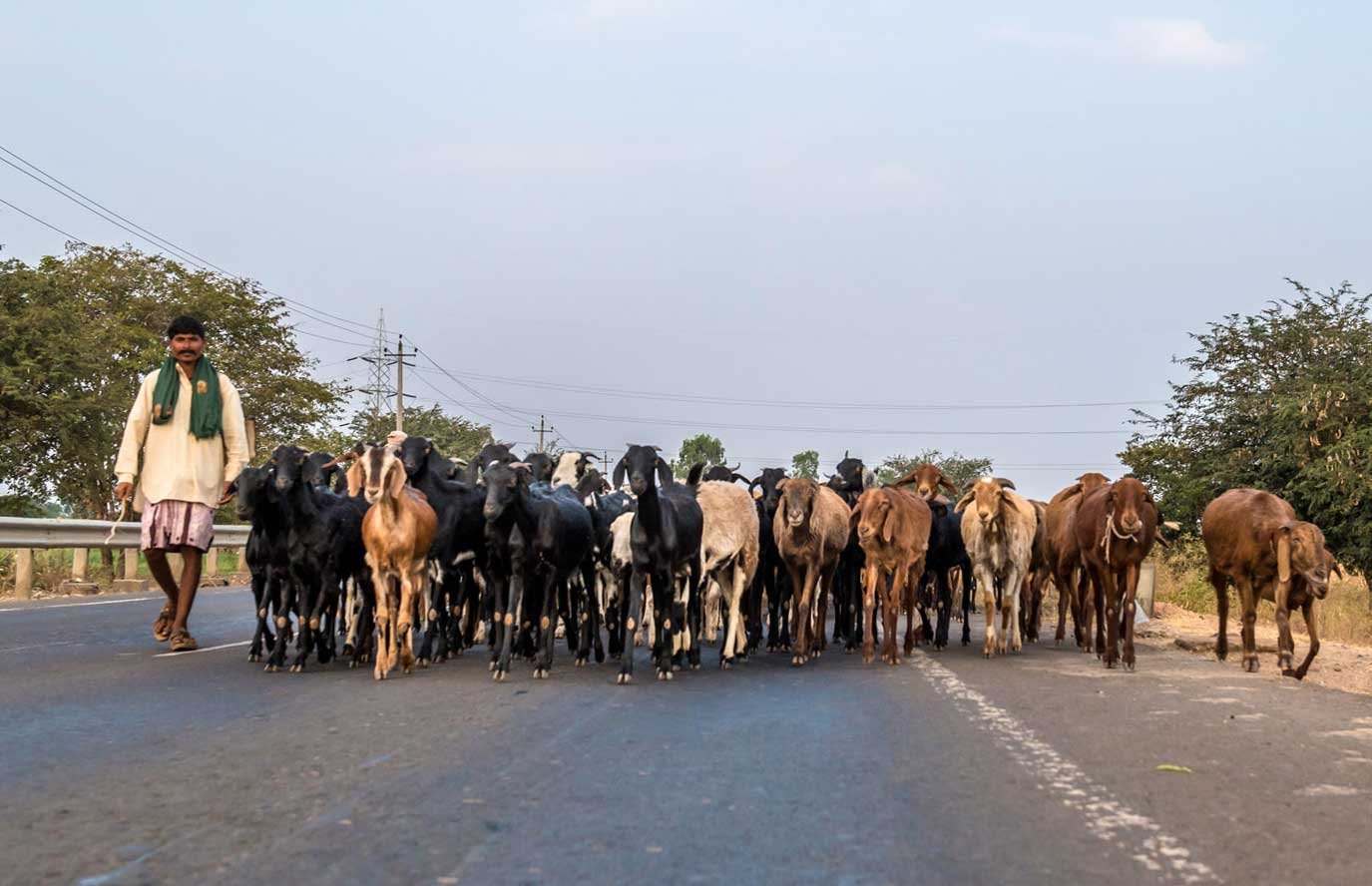 Walking on major roads (here, the Bagalkot-Belgaum road) is not easy, and the animals often get sick or injured. Photo Prabir Mitra / PARI 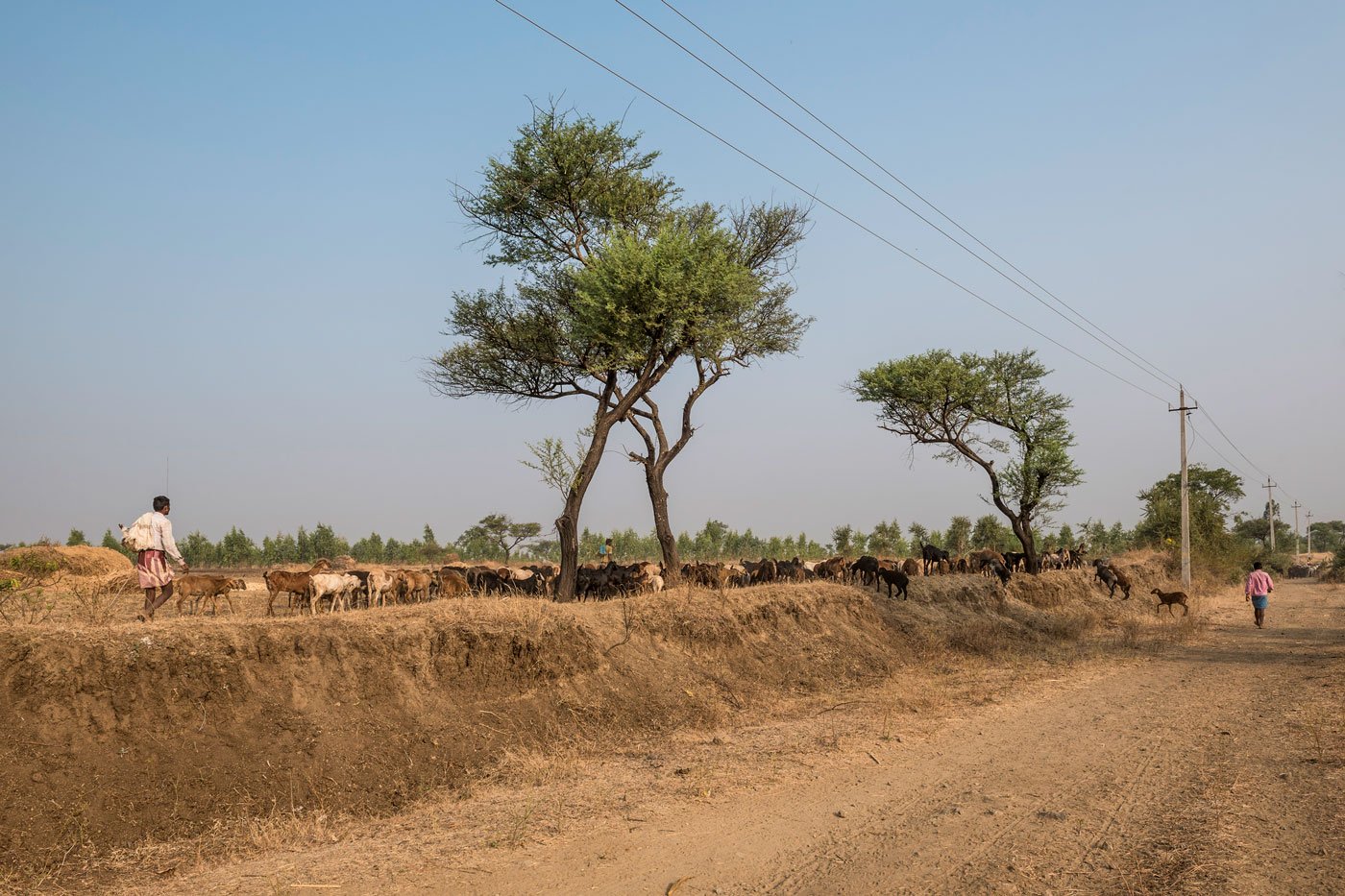 ‘Off road’ migration has its own difficulties due to the rugged terrain. And the pastoralists have to avoid any patches of agricultural land if they don’t have a grazing and manure agreement with that farmer. Photo Prabir Mitra / PARI

Over two decades ago, when the demand for these blankets and rugs was robust, the weavers bought raw wool from Kuruba shepherds for Rs. 30 to Rs. 40 per kilogram. Now they obtain it for about Rs. 8-Rs. 10. The ready blankets are sold to local shops for anything between Rs. 600 to Rs. 800, with smaller-sized rugs selling for Rs. 200-Rs. 300. But this income is highly variable for the pastoralists. A family that owns around 100 animals, estimates from my conversations show, would make roughly Rs. 70,000 to Rs. 80,000 in a whole year from various sources, including wool, manure and selling animals.

And to stay afloat, the Kurubas are improvising too. In Mekalmaradi village in Sampgaon block of Belagavi's Bailhongal taluka, Dastagir Jamdar, a physically disabled Kuruba weaver, has started improvising with jute, leather and wool to make bags and rugs. “These products can be sold in local markets. Sometimes, retailers from Bengaluru come and place small orders too, but the demand is uncertain,” he says.

For some of the pastoralists, the emphasis has shifted to earning a living by selling their animals for meat and milk. With the state government (through the Karnataka Sheep and Wool Development Corporation) promoting breeds of sheep other than the Deccani, such as Red Nellore, Yelgu and Madgyal, which can produce more meat than wool, some of the Kurubas are also increasingly keeping these breeds. A male lamb fetches a good sum in the meat industry – up to Rs. 8,000 sometimes. In February 2019, P. Nagappa, a Kuruba pastoralist, earned Rs. 6,000 from selling a healthy three-month-old lamb at the sheep market in Sira town in Tumkur district. And with a growing goat milk industry in the region, some of the Deccani sheep owners are focusing on rearing goats for milk.

A local veterinarian, who has been working with pastoral communities in Karnataka for over two decades, told me that to ensure their animals look healthy, some of the Kurubas now medicate them liberally, often buying the medicines without consulting a veterinarian, and from unqualified dealers.

Back on the Bagalkot-Belgaum road, S. Bandeppa is continuing his search for favourable farmland. Starting from around a decade ago, many farmers in North Karnataka have been turning away from organic practices and moving to chemical fertilisers. As a result, manure too is no longer a steady source of livelihood for Bandeppa and other shepherds, who try to look for more agricultural work during the rest of the year.

And with the traditional symbiosis between farmers and pastoralists on the decline, some of the shepherds are migrating across greater distances with their herds and belongings – on an ever-harder journey in search of friendly farmers and flat lands. 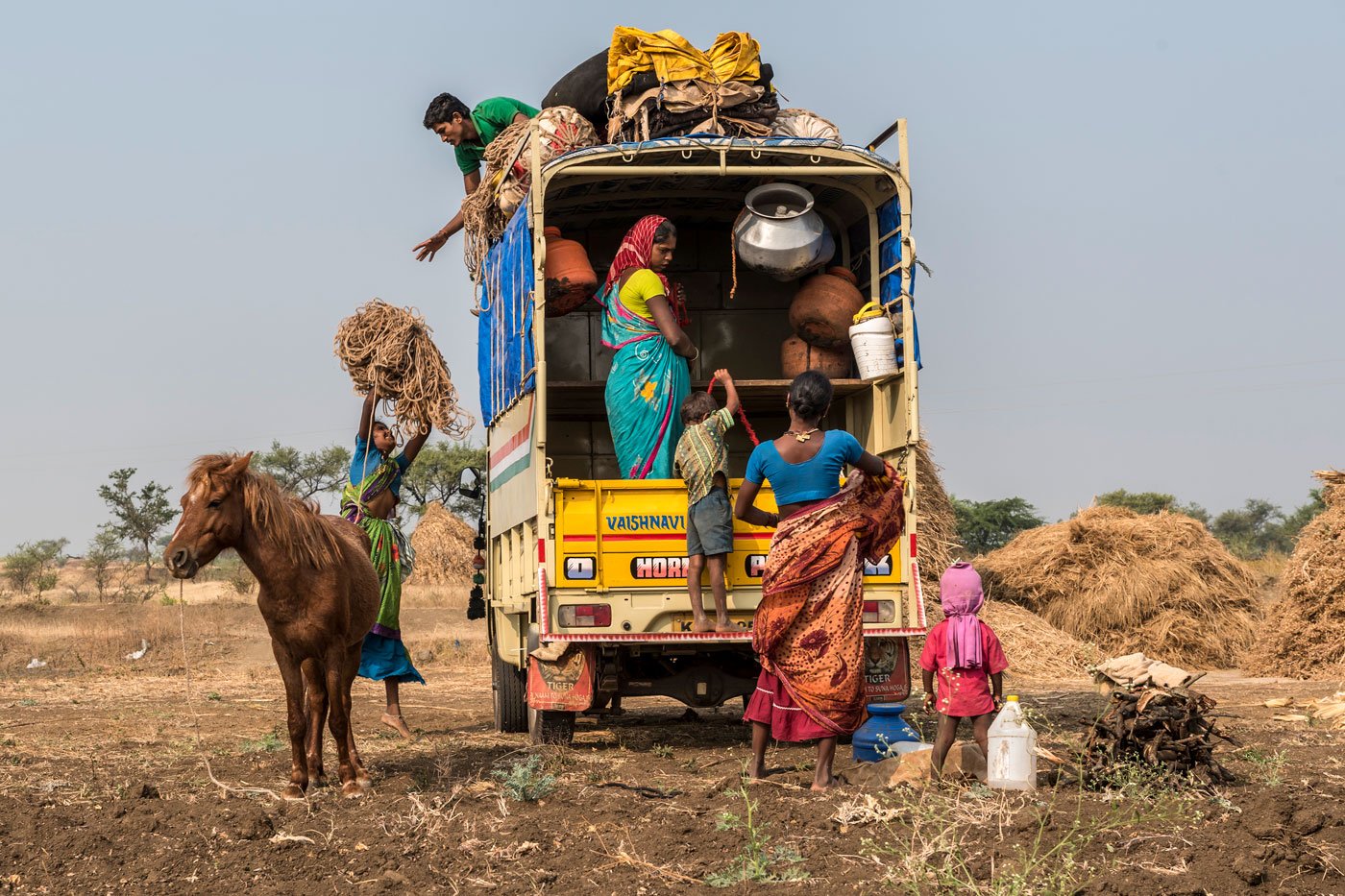 Some families hire vans to fit in their entire world as they migrate – their belongings, children, sheep and goats are all packed in. Bigger animals like horses are taken on foot separately to the new destinations. Photo Prabir Mitra / PARI 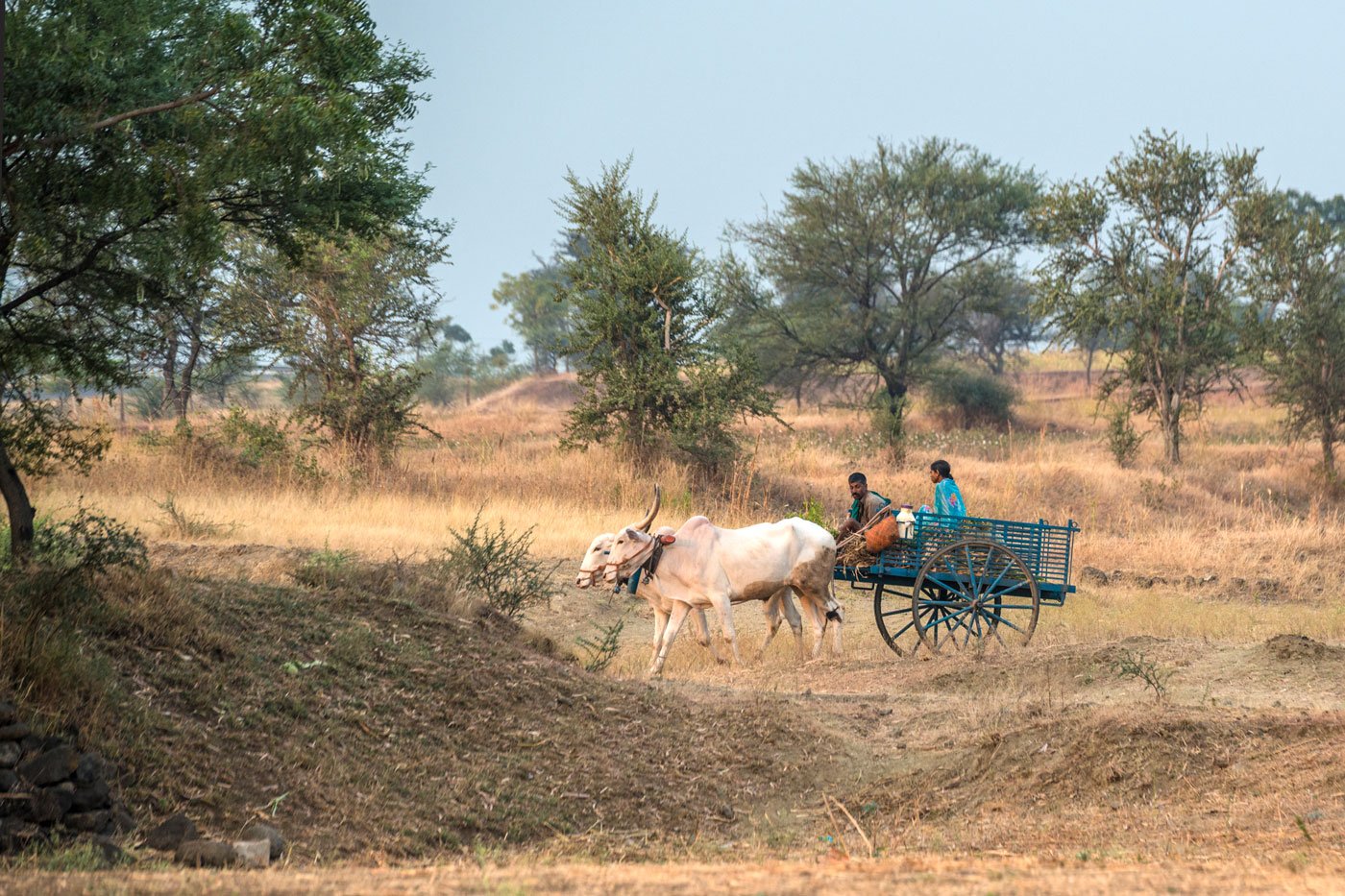 Some families still journey on bullock carts. This is around Chachadi village in Parasgad block of Belagavi district. Photo Prabir Mitra / PARI 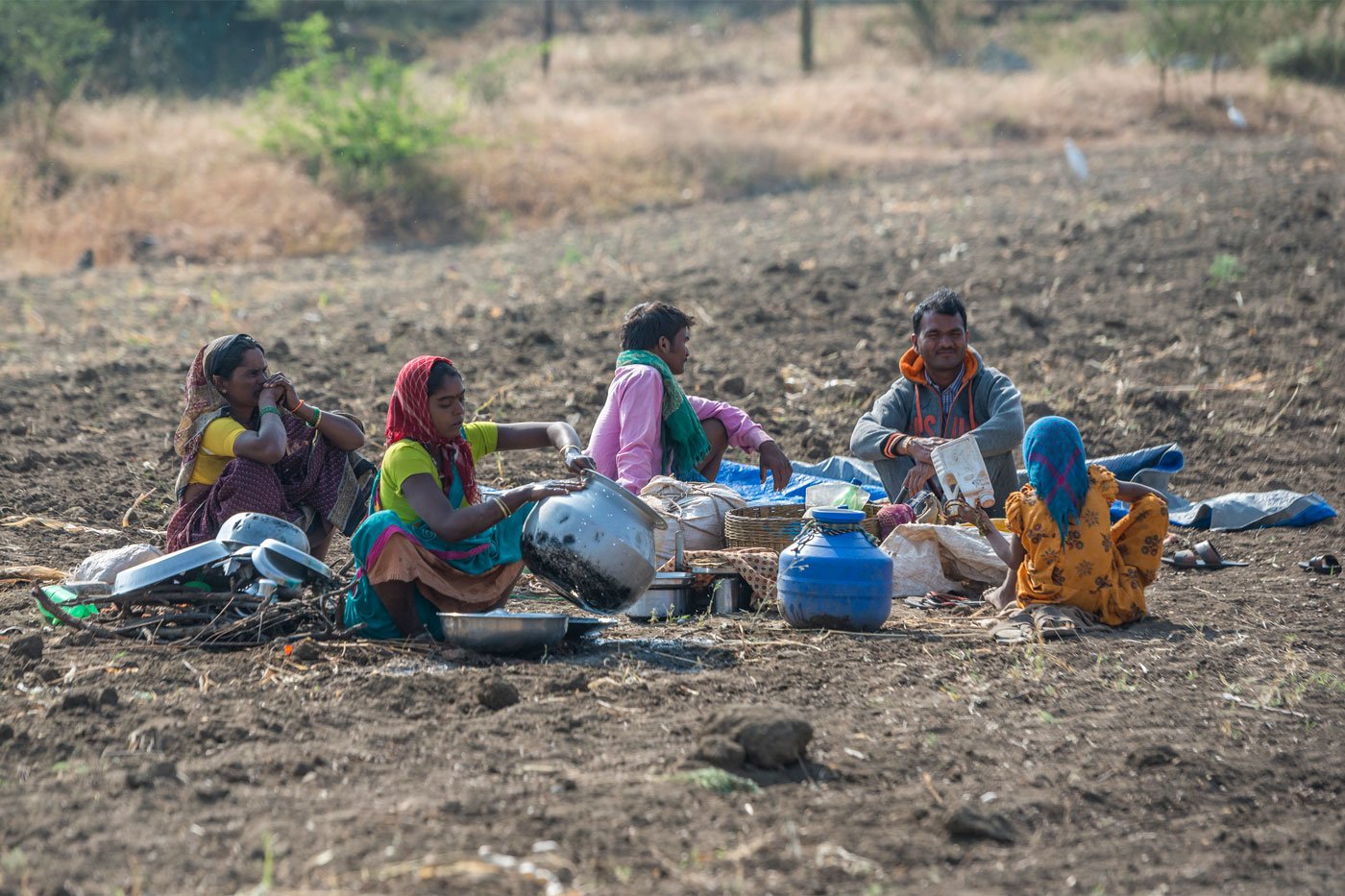 Often, two or more families divide the responsibilities of looking after their herds. They live as an extended family and migrate together after Diwali (in October-November) and return to their villages by spring (March-April). Photo Prabir Mitra / PARI 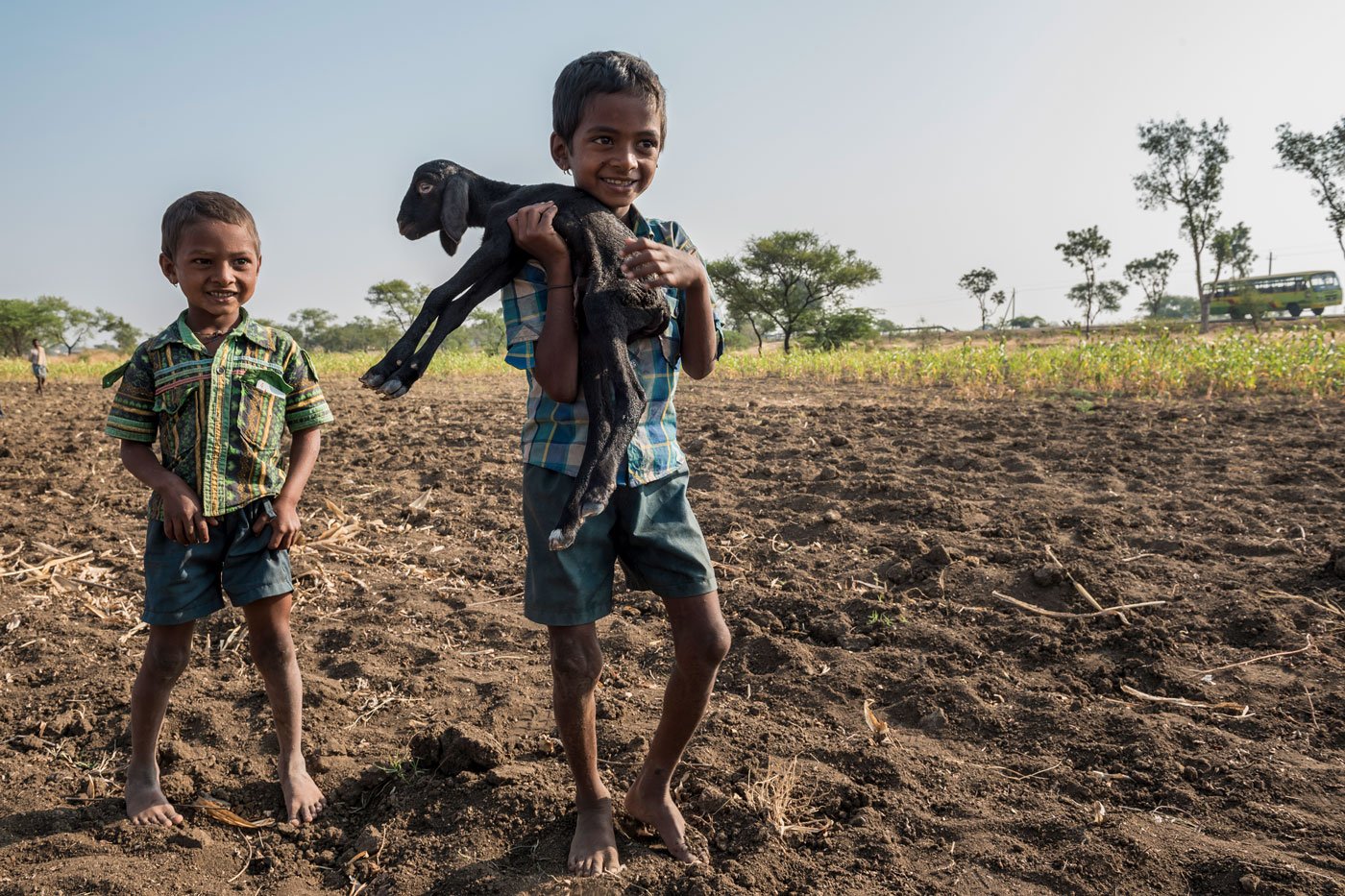 Vijay, 5, and Nagaraju, 8, can readily recognise an animal even when it’s in a group. 'This is my best friend', smiles Nagaraju. Photo Prabir Mitra / PARI 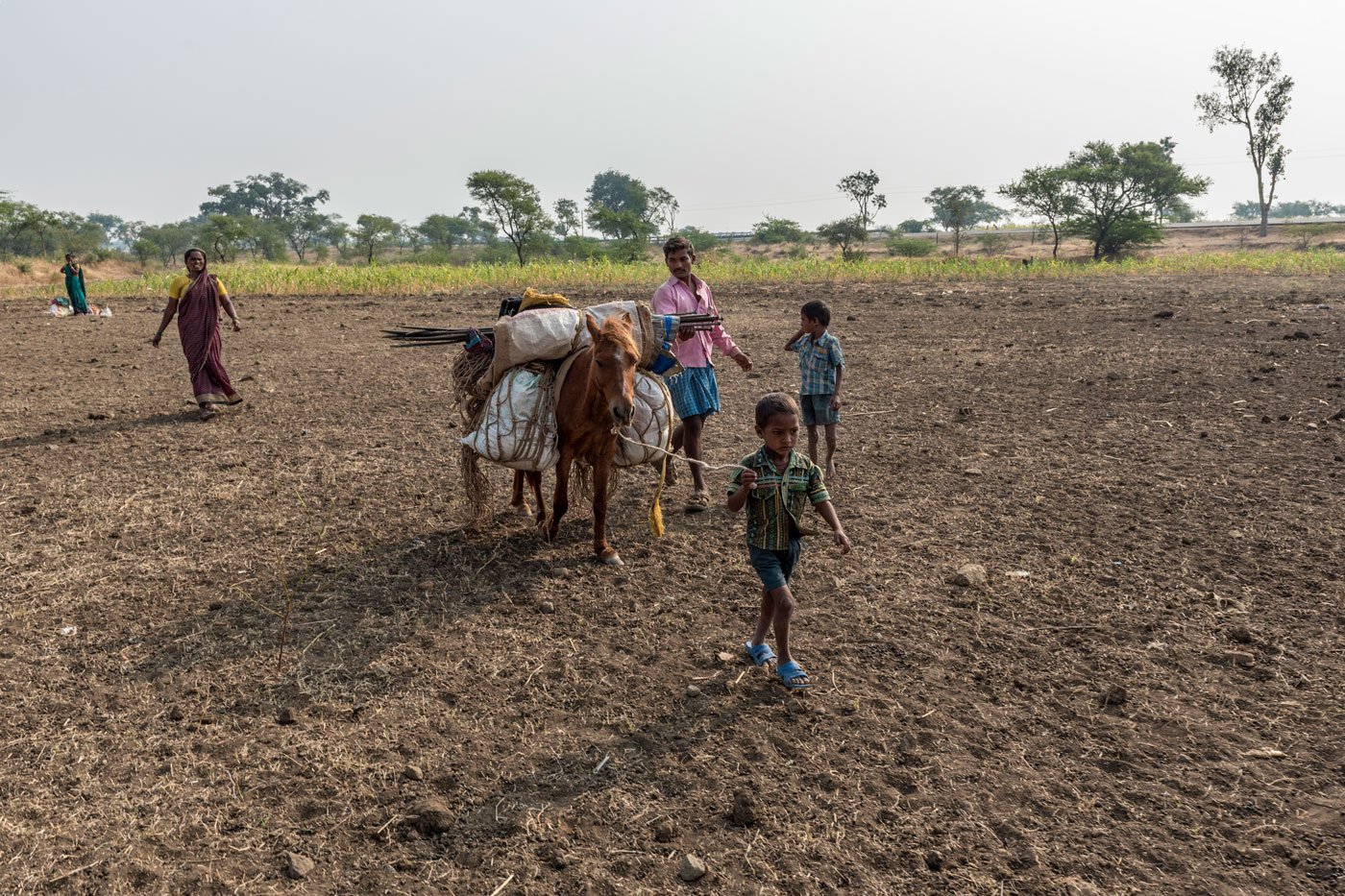 Young Vijay and Nagaraju accompanying their horse (the animals are used for carrying heavier loads), along with their father Neelappa Chachdi. Photo Prabir Mitra / PARI 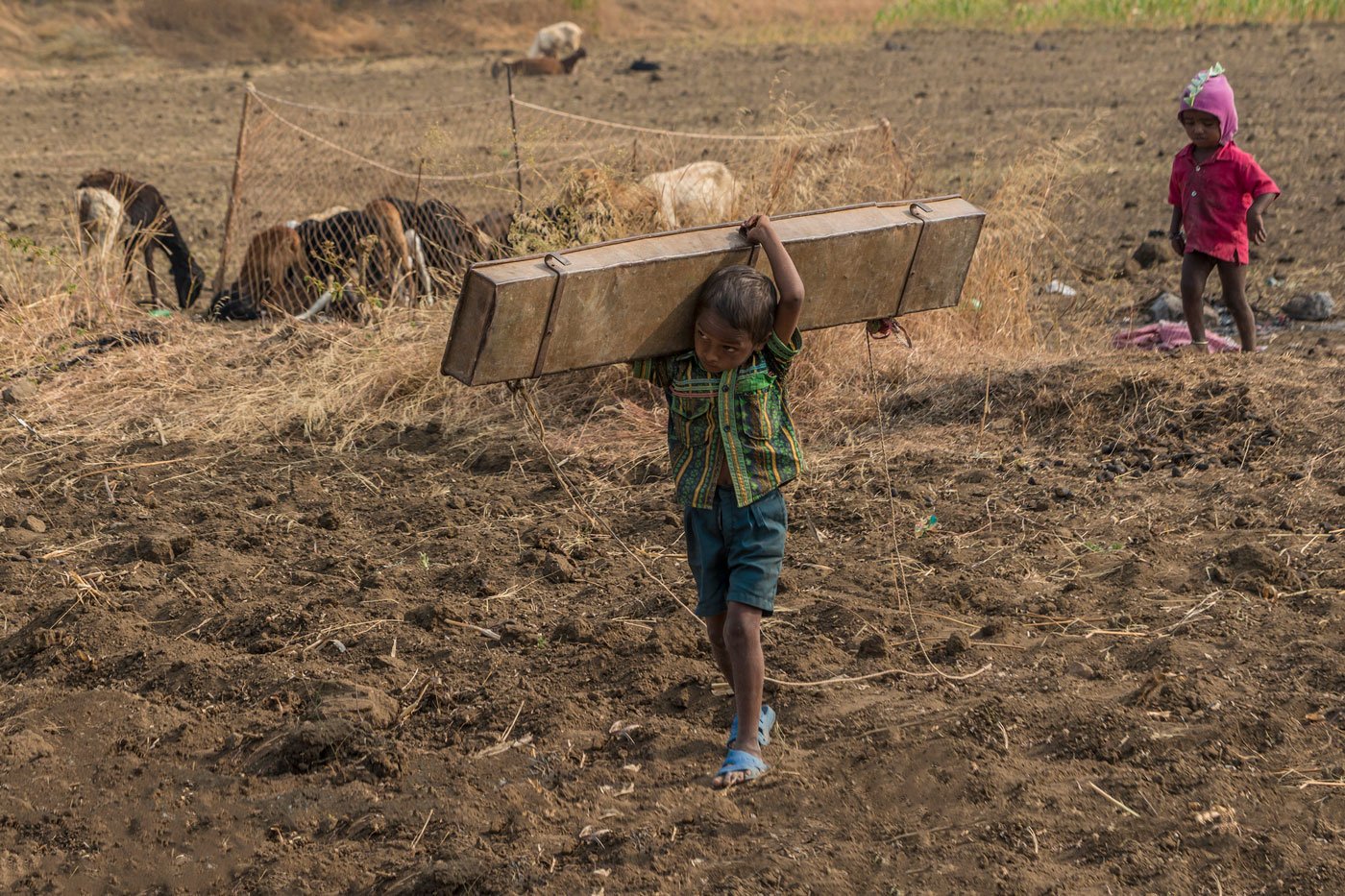 Setting up home in a new settlement after days on the road is an important task. Children chip in too. Vijay is only five, but pitches in readily. Photo Prabir Mitra / PARI 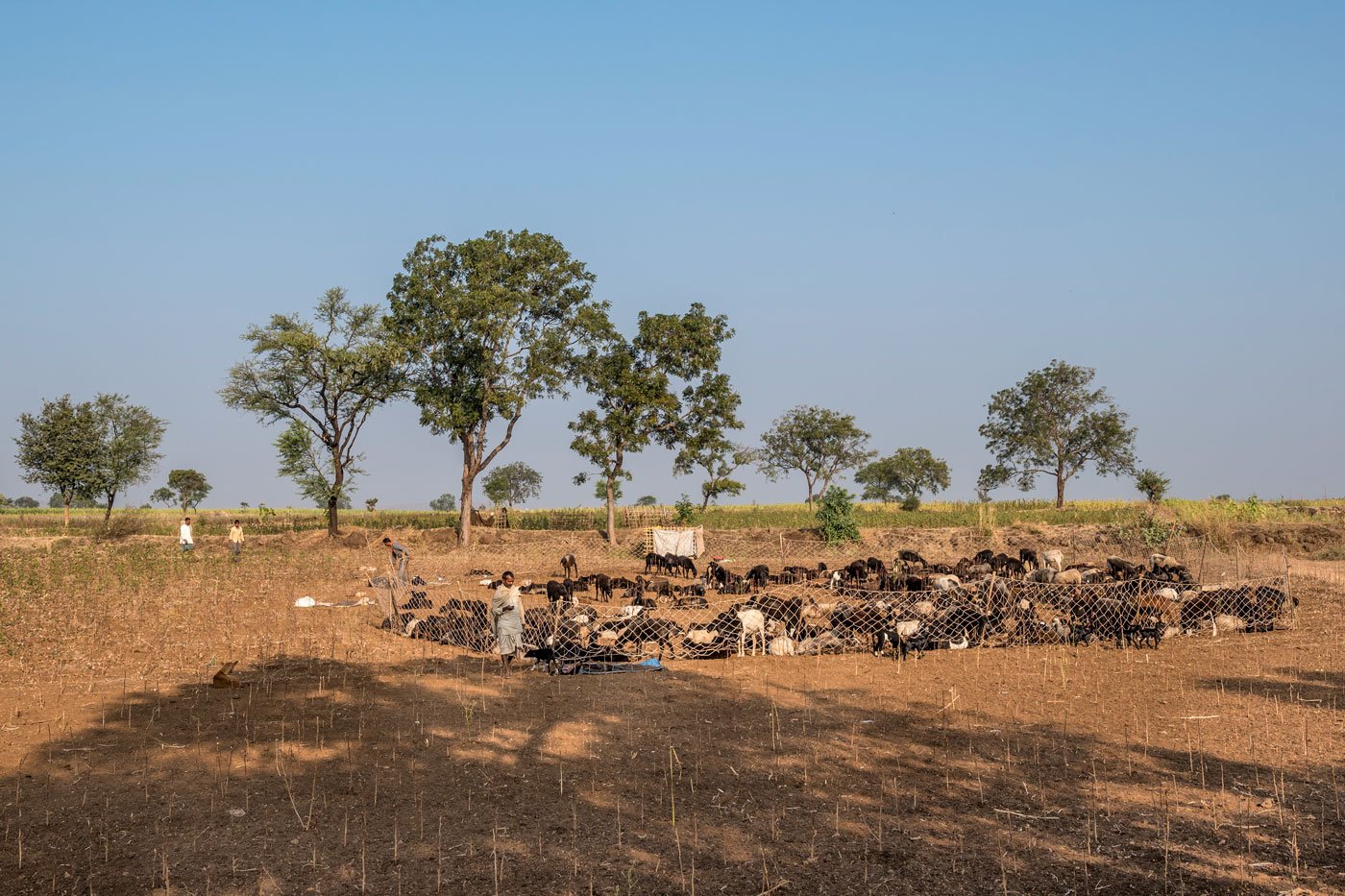 Shepherds with their herds on a farm off the Balihongal-Munavalli road in Belagavi district. This eco-friendly way of procuring manure is now on the decline, with many farmers using chemical fertilisers. Photo Prabir Mitra / PARI 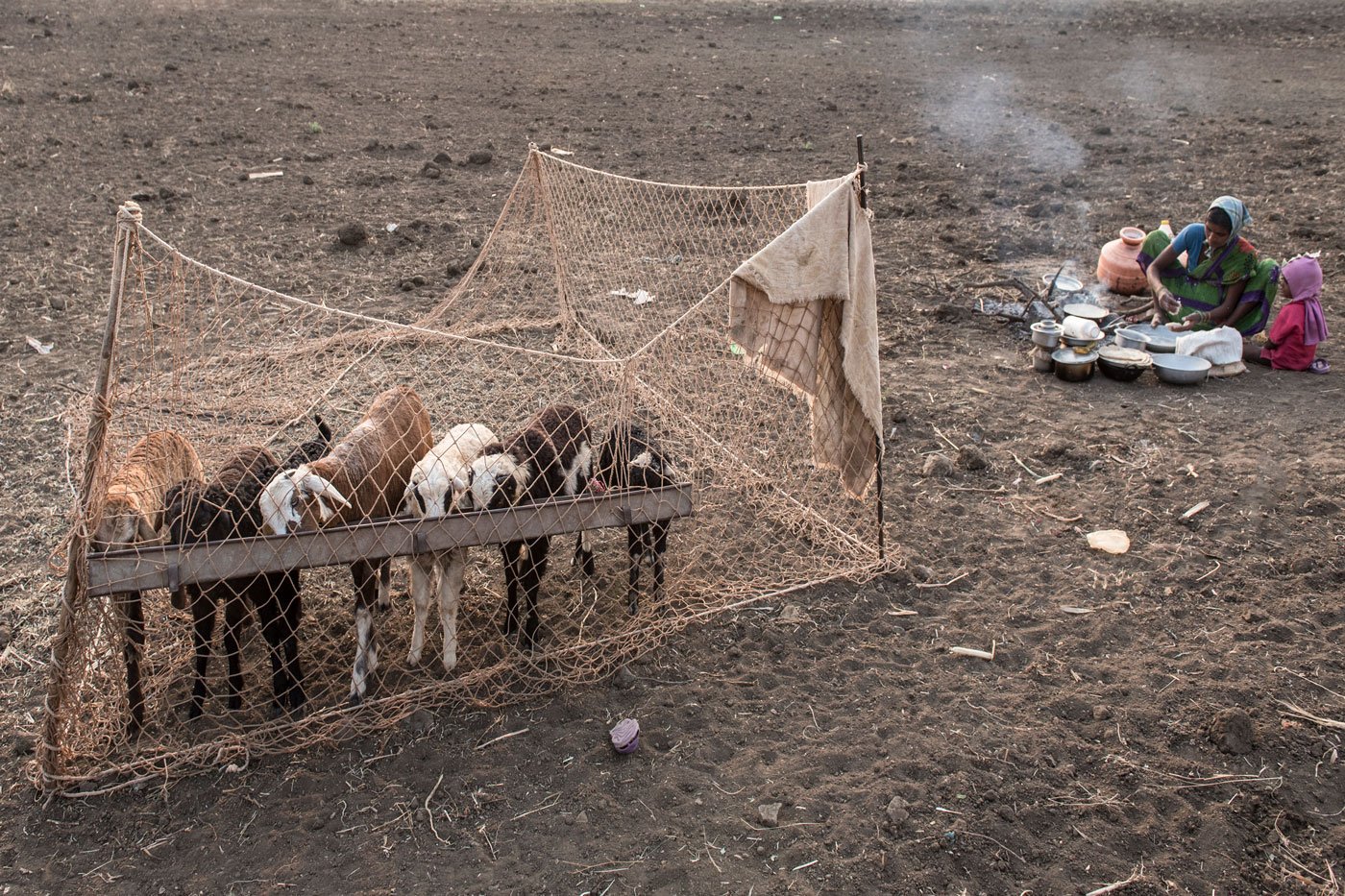 On a farm stop on the way, Gayathri Vimala, a Kuruba pastoralist, is cooking food for her toddler while keeping an eye on her animals as they feed. The rope enclosures contain the herds within their new ‘home’. The water source is important too when deciding where to stop on the migration route. Photo Prabir Mitra / PARI 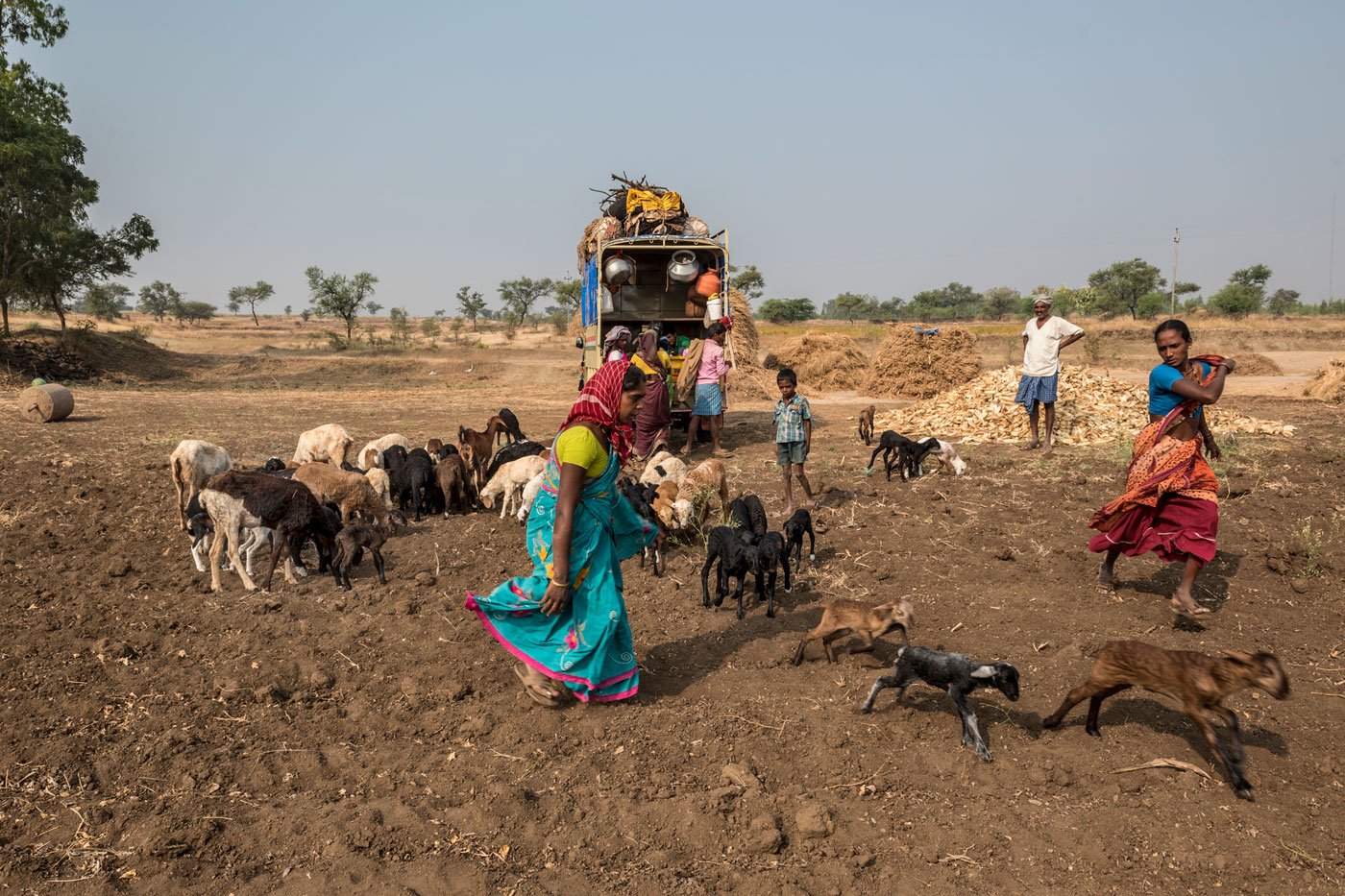 When it's time to move on to the next stop, getting young animals to behave is a difficult task, not dissimilar to managing a toddler. Photo Prabir Mitra / PARI 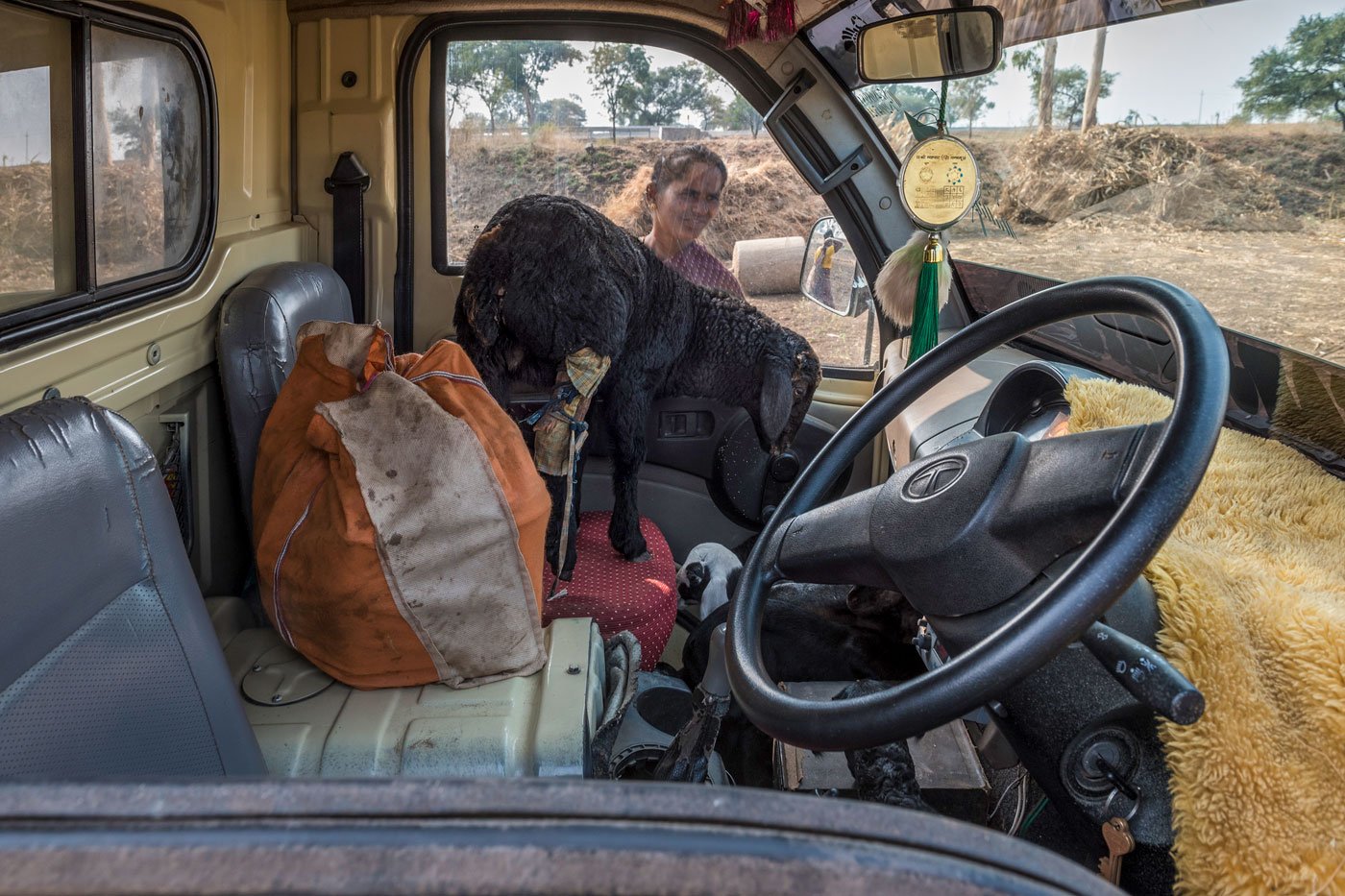 During the migration walks, great care is taken to safeguard the wounded or ill animals – here, a wounded goat had occupied the front passenger seat of a van. Photo Prabir Mitra / PARI 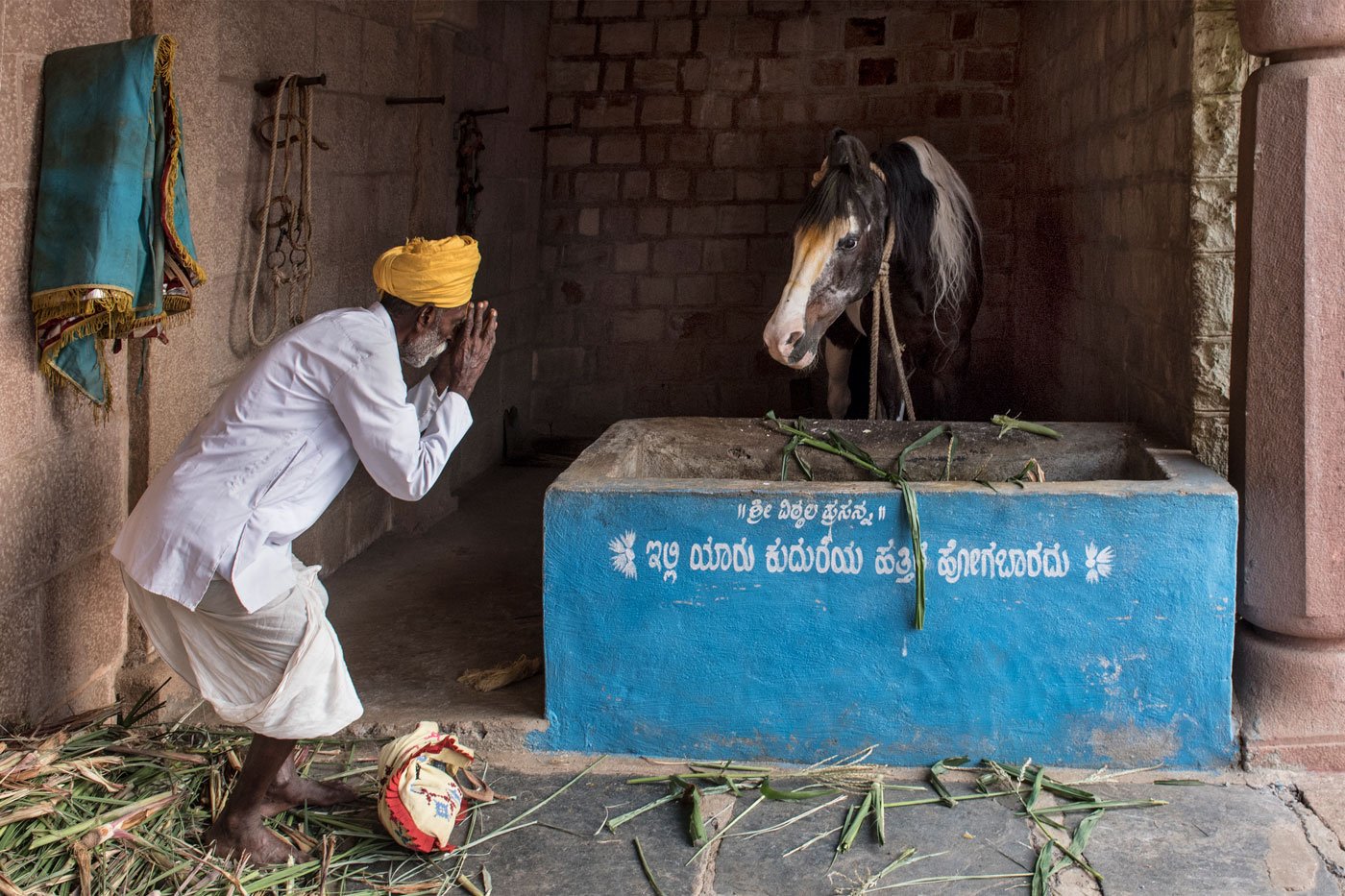 Kurubas revere their animals, especially the horse; in Alakhanur village, a shepherd bows before the animal 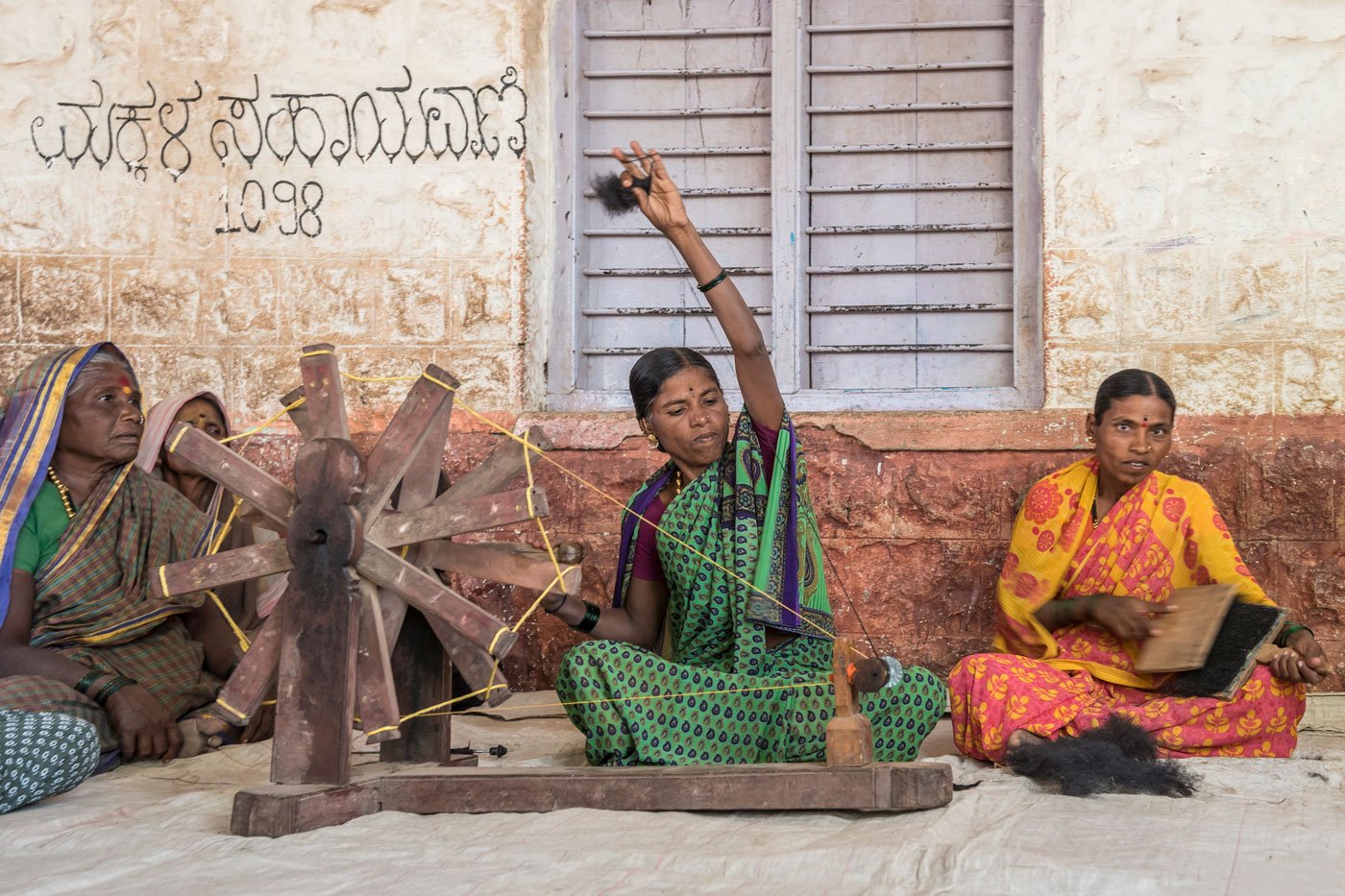 In some villages, women have formed ‘self-help-groups’ to collectively try and generate better incomes from Deccani wool. In Dadibhavi Salapur, Shantavva Bewoor is spinning on a charkha, Savitri is processing the fleece, while Lammas Bewoor awaits her turn to spin. Photo Prabir Mitra / PARI 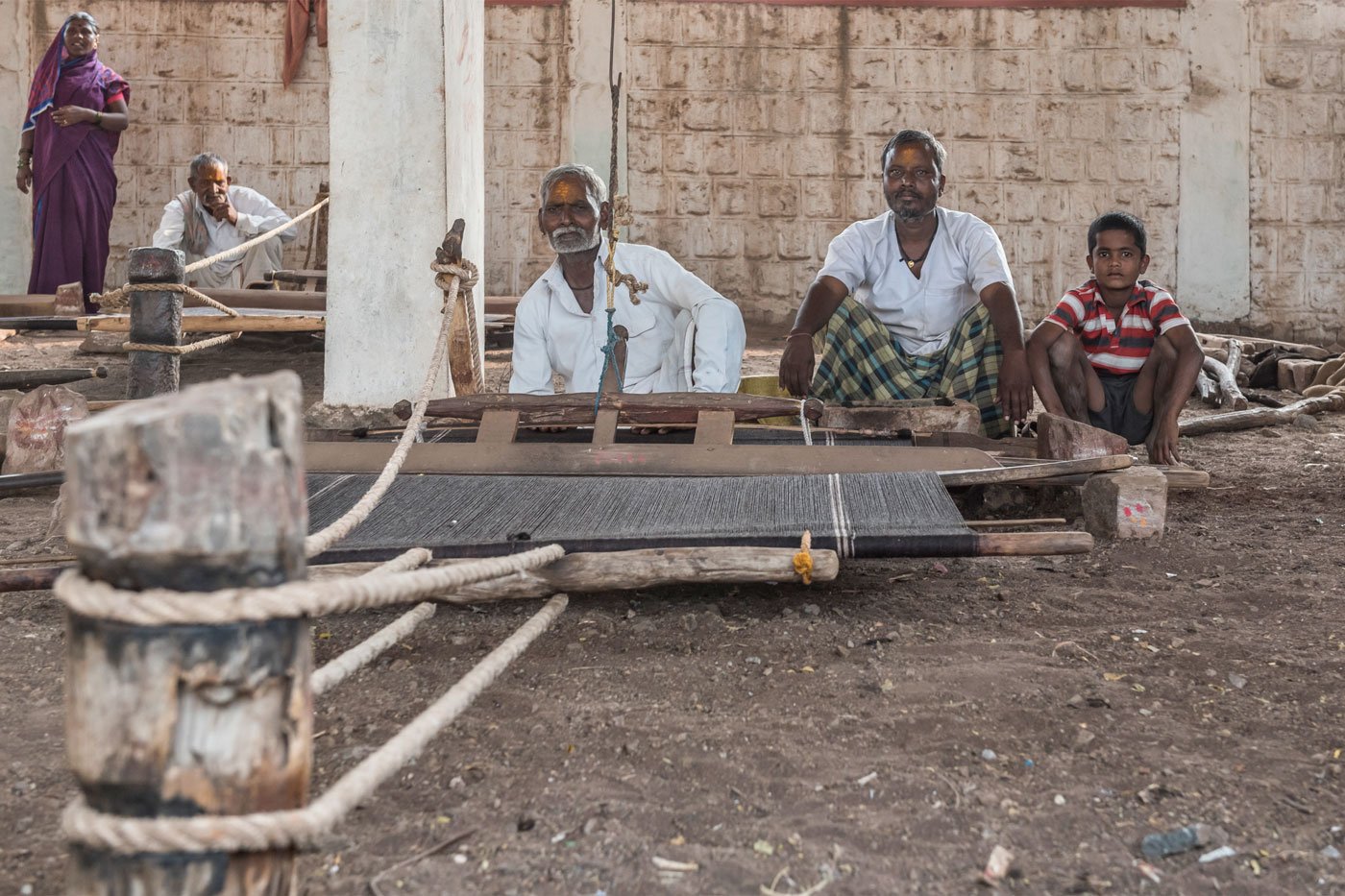 The pit loom traditionally used to produce Deccani blankets. P. Eeshwarappa and his son Beerendra at the loom, accompanied by Narayan, the youngest of the three generations. Photo Prabir Mitra / PARI 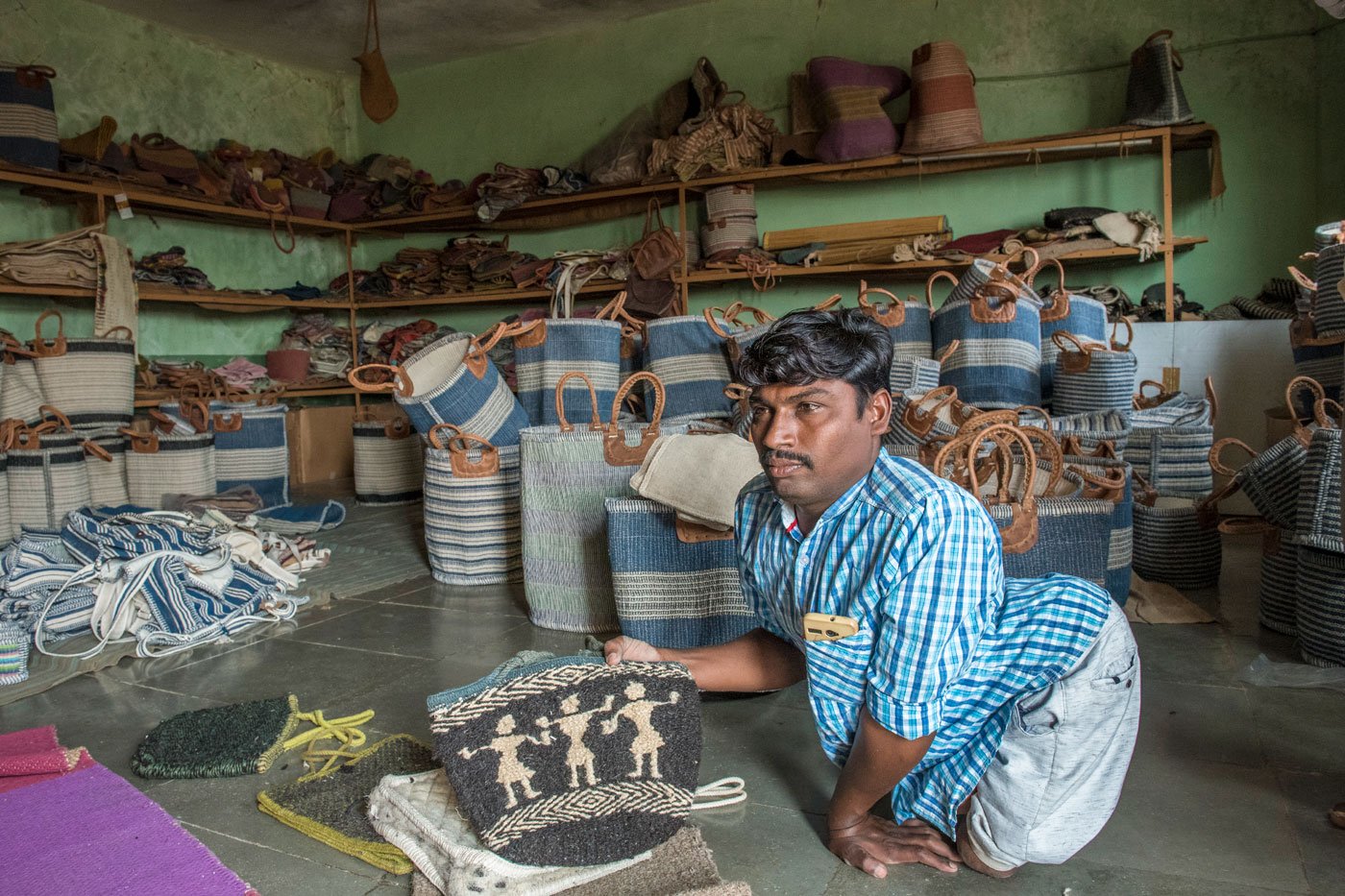 In Mekalmardi village, in an effort to enhance his income, Dastagir Jamdar has been combining jute, leather and wool to improvise bags and other items. Photo Prabir Mitra / PARI 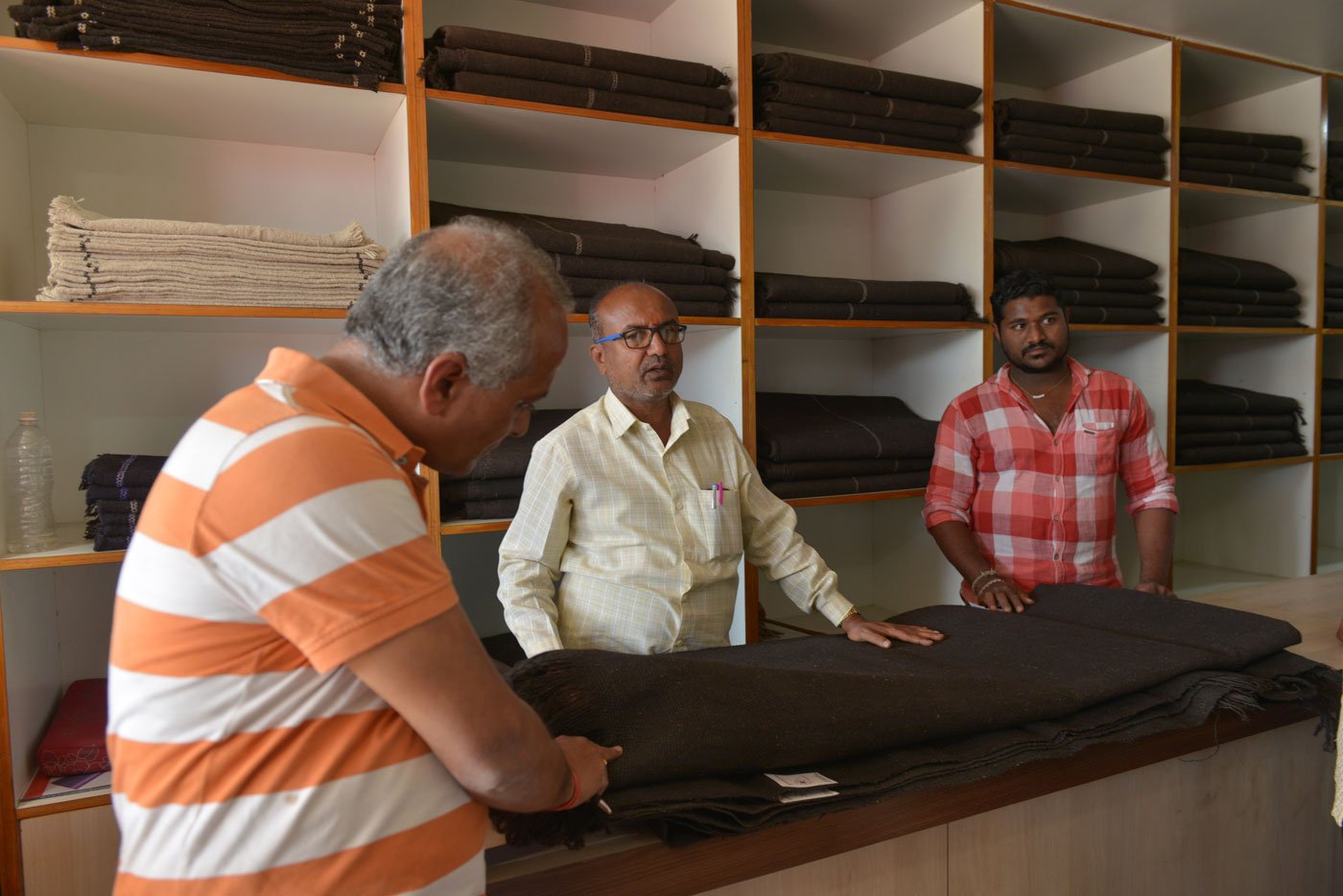 Dinesh Seth, shop manager, checks the quality of a blanket. The average price of such blankets in the shops ranges between Rs. 800 and Rs. 1,500, and smaller rugs cost Rs. 400 to Rs. 600. But the demand for Deccani woollens has been steadily falling. Photo Prabir Mitra / PARI 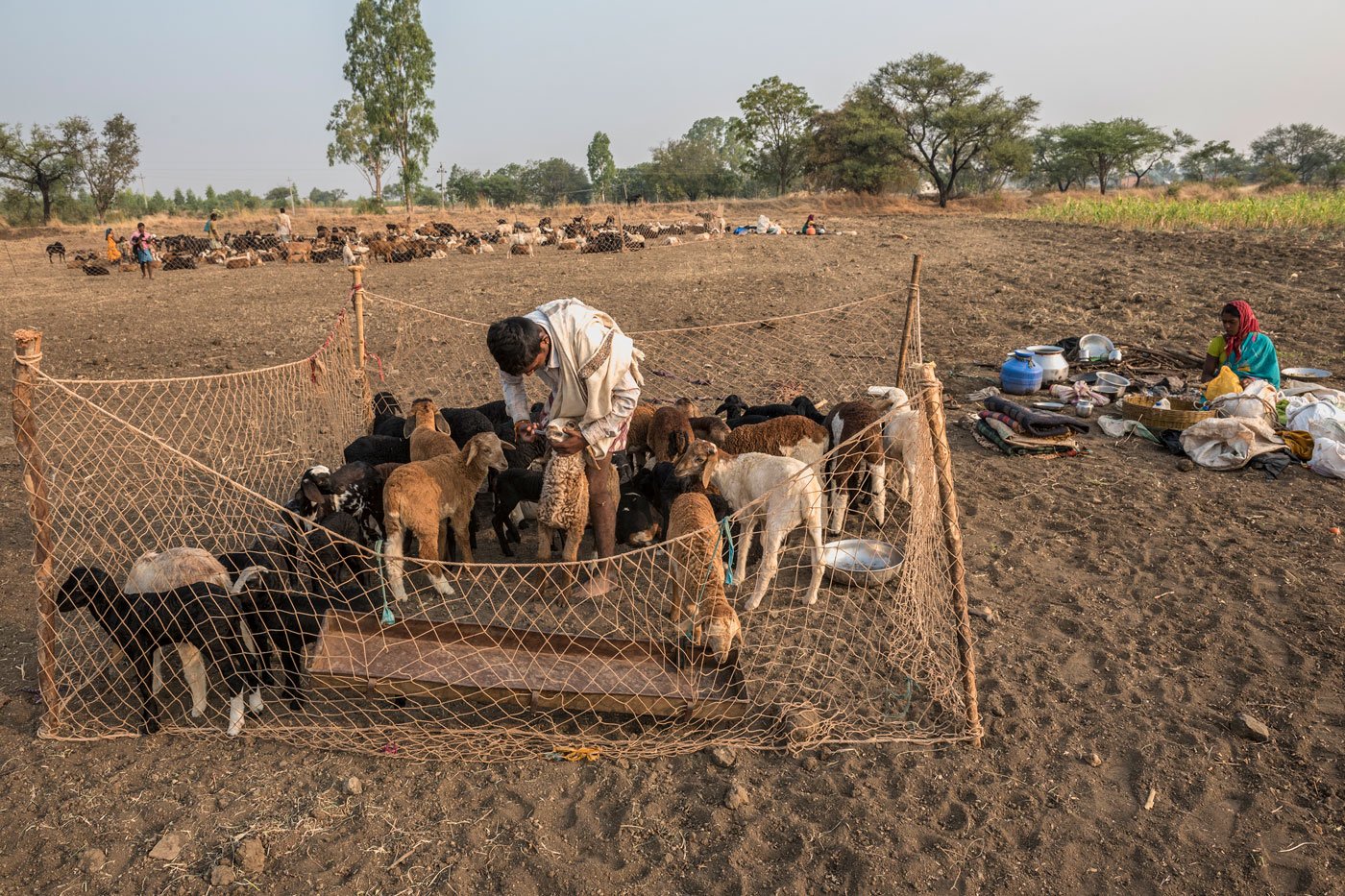 To ensure their animals look healthy at the livestock market, some of the Kurubas now medicate them liberally. Pastoralists like Mailara Bandeppa have begun to medicate (deworming and antibiotics) their animals, often without proper veterinary advice. Photo Prabir Mitra / PARI 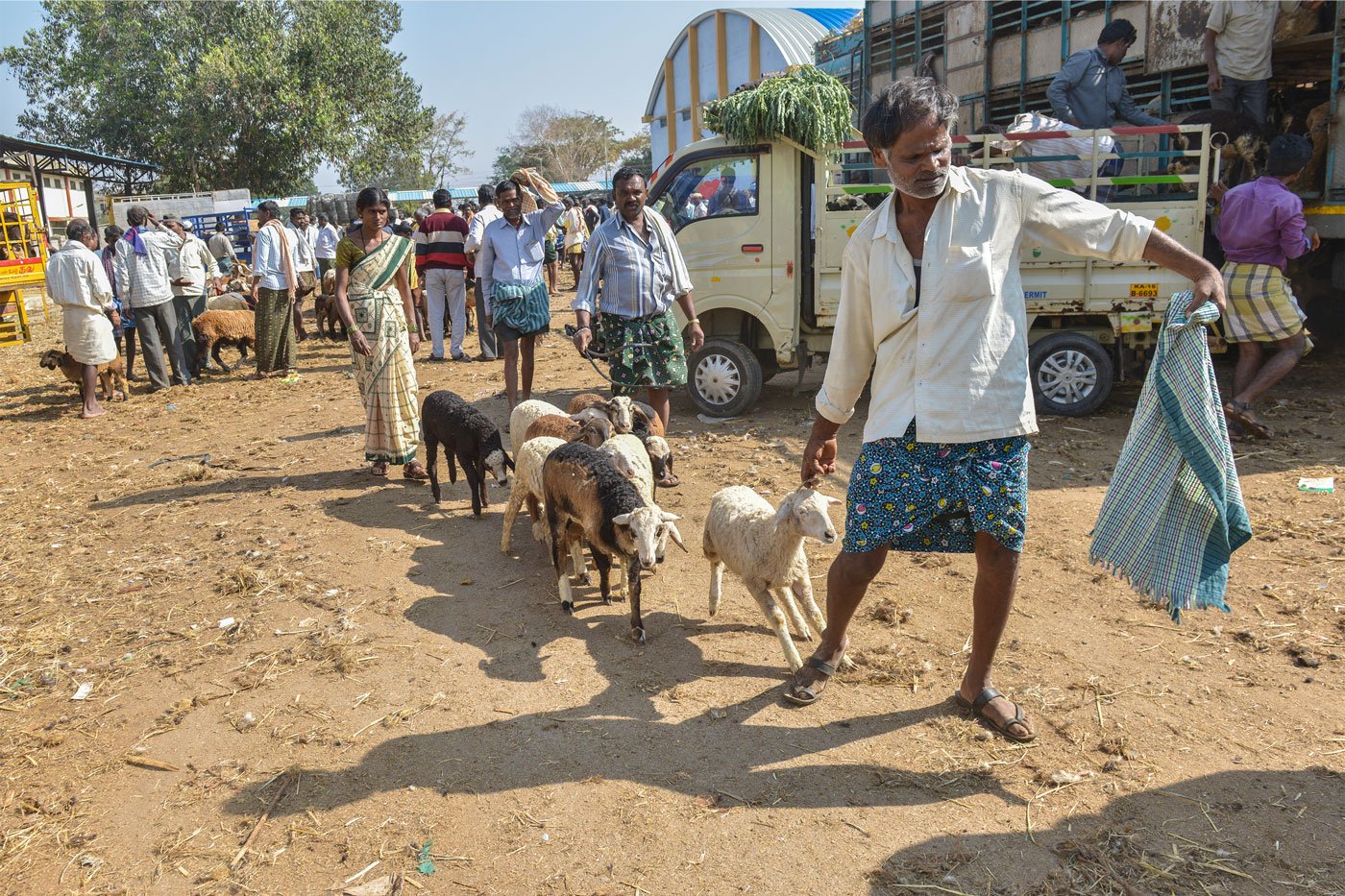 Kaka Nagappa leading his flock to the market at Sira, hoping to sell some of the animals. With the state government promoting breeds of sheep other than the Deccani, some of the Kurubas are also increasingly keeping these breeds. A male lamb fetches the highest sum in the meat industry. Photo Prabir Mitra / PARI 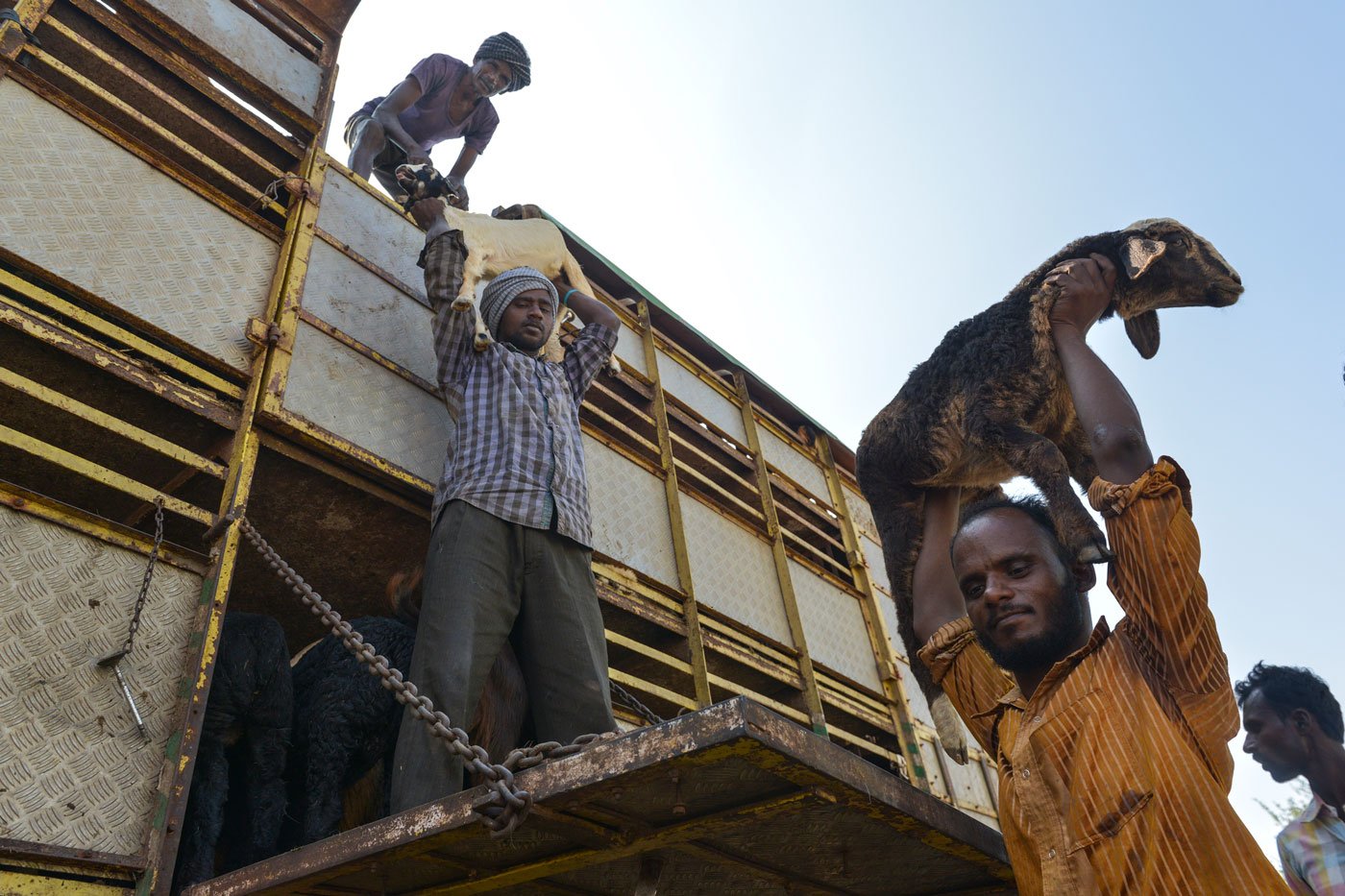 Animals being loaded into a truck, to be taken away to the Tuesday sheep-goat market in Sira town in Tumkur district. Photo Prabir Mitra / PARI